China is still an economic powerhouse, despite the fact that its growth is slowing. The country’s economy grew 6.2 percent in the second quarter, down from 6.4 percent the period before. It’s the slowest pace since 1992, and a dramatic decrease from a dozen years ago, when growth was 14.2 percent. However, a January research report from eMarketer projected China will overtake the U.S. as the world’s biggest retail market this year. That’s why it remains vital that brands connect with this country, especially at the digital level.

"Chinese consumers are increasingly interested in apparel brands and retailers that offer not only trendy products, but also products or experiences that are different from others."

Consider that Chinese consumers shop more often overall, and even more online and via mobile, according to data presented at the Gartner Marketing Symposium/Xpo 2019 in San Diego. When you add in the fact China’s population stands at nearly 1.4 billion and, according to Statista, nearly 1.6 billion mobile phone subscriptions have been registered there, it’s clear the market remains rife with opportunity. It’s expected retail sales will exceed $5.6 trillion this year, about $100 billion more than in the U.S., according to eMarketer.

When it comes to buying new clothes, “Chinese consumers are increasingly interested in apparel brands and retailers that offer not only trendy products, but also products or experiences that are different from others,” says David Liu, analyst, at the Shanghai-based China Market Research Group (CMR).

E-commerce has increased across China over the past three years, but mobile has seen the most striking growth, according to the Cotton Council International (CCI) and Cotton Incorporated Chinese Consumer Survey. Last year, 64 percent of consumers made mobile apparel purchases, up from 55 percent in 2017 and 50 percent in 2016. By comparison, apparel purchases on tablets (13 percent) and computers (30 percent) have only seen increases of roughly 2 percent in the same period.

More than one-third (34 percent) of Chinese consumers buy clothes with their mobile phone about once every 2-to-3 months, according to the China Consumer Research. Another 21 percent buy via phone once a month, 18 percent purchase once every 4-to-5 months and 14 percent make a smartphone purchase every 2-to-3 weeks. 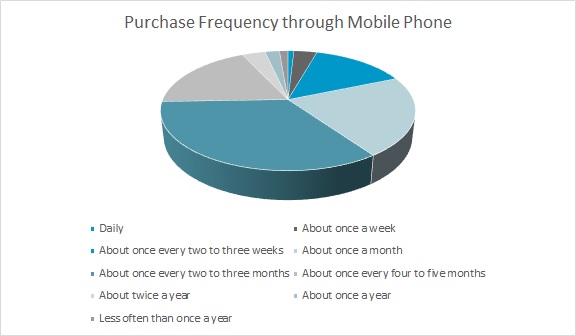 Apparel consumers in China get their ideas for new clothes mostly from the people around them, like friends and colleagues (67 percent) and family (62 percent), as well as in-store displays and windows (53 percent), and in-store sales people (45 percent), according to the China Consumer Research.

Unlike in the U.S., the Chinese rely very little on brand emails. A study by Optinmonster, lead generation software, says 60 percent of U.S. consumers say they’ve made a purchase as a result of an email marketing message. By comparison, only 1 percent of Chinese consumers say they get clothing ideas from marketing emails. And only 2 percent start their online apparel shopping from emails they receive from stores and brands.

Gartner’s presentation described Tmall as “Amazon on steroids,” as it’s an enormous marketplace that doesn’t keep inventory, but serves as a marketplace for others. Alternately, WeChat was started as a one-to-one messaging platform, but now spans the full customer journey. For instance, Gartner stated, users can look up a car sharing service, place a ride request, and pay for it all within the app. Additionally, WeChat has brand-sponsored mini programs so consumers can view products and promotions all within the WeChat platform.

But brands must also realize that “everything in China is pay to play,” according to Gartner. On social media, for instance, brands need to pay if they want their messages and campaigns to go through.

But social media is very positive for the apparel industry, says CMR’s Liu.

“Social media brings both big and small brands more flexibility and efficiency in conducting marketing activities,” he says. “Social platforms and apps like Red and Tik Tok cooperate with a wide range of influencers including celebrities, movie and TV stars, and fashion/food/lifestyle bloggers. This way, brands can choose to partner with the influencers that are most popular among their target consumers to most efficiently deliver their brand messages. Moreover, as there are a wide range of influencers to choose from, brands can always find the optimal influencers to work with, within their budget.”

Chinese consumers use social media sites mostly for watching videos and reading; not buying clothes, according to the Chinese Consumer Research. However, since social media is a tool for information sharing and interaction, more consumers hope brands and retailers will use the platforms for things like giving ideas and tips on what to wear (48 percent), sharing their newest clothing styles (44 percent), sharing information about coupons, promotions and sales (41 percent), providing exclusive deals and coupons for being a loyal follower (36 percent), and posting entertaining videos about their product. Slightly more than one-quarter of consumers (27 percent) would like social media sites to provide the ability to purchase apparel.

Things that definitely don’t work for consumers are fake reviews, ads, social accounts, and counterfeit products. Gartner said such material has created a toxic marketplace for brands, to the point that only 53 percent of consumers say they trust brands, down from 65 percent just two years ago. The company says blockchain offers a unique opportunity for brands to address these trust issues, especially where supply chain and transparency are concerned.

“Key online shopping platforms like Tmall and JD.com, and key social platforms for brand marketing like Red are all working on reducing the number of fake reviews and counterfeits,” Liu says. “And there is a growing awareness among consumers to purchase products from authorized channels like flagship online stores on Tmall and JD.com, and from shopping malls. The decreasing brand trust means consumers are more aware of fake reviews and products.”

While regaining trust isn’t easy, Liu agrees with Gartner that steps can be taken to improve the situation.

“Brands should better manage their online stores and avoid fake reviews,” he says. “And they should also offer both good quality product and after-sales service to guarantee consistency between actual consumer experience and reviews to establish consumer trust. Blockchain technology provides a solution for the trust problem. Every transactions is traceable with blockchain, so if any link on the transaction line is identified as containing fake information or products, we will be able to dig out the whole line.”

Where Men Purchase Their Athletic Apparel

Fashion Can Work With Shoppers to Move Beyond COVID