Celebrities and endorsements have been around since the dawn of …well, celebs themselves. From Charlton Heston plugging Van Heusen Century shirts to Wilt Chamberlain’s endorsement of Botany’ 500 suits, the list is long. Add to that celebrity bloggers, and the list of influencers is nearly endless. Of course, pairing the right influencer with a particular brand can be challenging. But in the effort to break from the pack, it’s still considered a sure-fire way to draw attention to a brand or new product.

"Social media has allowed for the democratization of influence...Anyone who has no influence today can have a ton tomorrow for any number of reasons. And if a brand is able to identify that early on, they can talk to that person sooner than anyone else and magnify the power of that influence."

“Social media has allowed for the democratization of influence,” Feldstein said. “Anyone who has no influence today can have a ton tomorrow for any number of reasons. And if a brand is able to identify that early on, they can talk to that person sooner than anyone else and magnify the power of that influence.”

Every month, just over 40,000 unique contributors are posting sponsored content, a figure that grows each month, according to a study by Captiv8, a company that connects influencers with brands. The company also finds that just over $100 million is being spent by brands on influencer advertising per month on Instagram alone, not counting similar activity on SnapChat and Vine. It sounds like a lot, but Captiv8 points out that just 0.15 percent of 80 million Instagram posts per day are sponsored — “which means we are far from the saturation point of influencer marketing.”

Earlier this summer, when Cotton Incorporated and Rue La La launched their #SummerofCotton weekend pop-up shop in Boston, they called on fashion blogger Jacey Duprie of Damsel in Dior to bring added glam to the event. Then Cotton Incorporated kicked off its #CoolerinCotton program, and via SheSpeaks.com, encouraged lifestyle bloggers to show off their best cotton looks on their Instagram pages. Heavyweights like @thestyleeditrix and @elyareganyan took them up on the challenge.

For the Back-to-School season, Cotton Incorporated launched its “Find Your Favorite” promotion, which features actress/singer Hailee Steinfeld. Steinfeld received an Academy Award nomination for Best Supporting Actress for her performance in True Grit. Yet she played for laughs in Pitch Perfect 2. Up next, a coming-of-age dramedy, The Edge of Seventeen, set for release in November, a movie Vanity Fair is touting as the “teen movie we’ve been waiting for.”

The “Find Your Favorite” program is an in-store promotion that features signage of Steinfeld in versatile and on-trend cotton looks. Launched in select malls last month, the campaign also features mannequins wearing cotton apparel inspired by looks worn by Steinfeld — all of which are available from retailers within each of the participating properties.

Style influence like that of Steinfeld’s can mean a lot to consumers. Slightly more than one-third of shoppers (34 percent) get their clothing ideas from store displays or window shopping, according to the Cotton Incorporated Lifestyle Monitor™ Survey. Among women, that figure increases to 39 percent, compared to 26 percent of men. Women are also significantly more likely than men to say they get apparel ideas from the internet (31 percent versus 25 percent), people seen regularly (27 percent versus 23 percent), magazines (19 percent versus 8 percent), and catalogs (17 percent versus 12 percent).

Millennials are significantly more likely than older generations to get apparel ideas online (38 percent versus 24 percent) and from celebrities (14 percent versus 6 percent), according to the Monitor™ data.

Interestingly, the Federal Trade Commission is getting tougher when it comes to celebrities and bloggers who are promoting products on their own sites or social platforms. The agency wants users to be clear when they’re getting paid to promote something. The agency approves of #ad at the beginning of a post, but not #sp and #spon, hashtags that indicate a sponsored post.

Online is where influencers such as bloggers, celebrities, etc., can have the most impact on purchases. That’s because although consumers are partial to purchasing clothes in-store, they prefer the product discovery phase of their shopping journey to occur online. 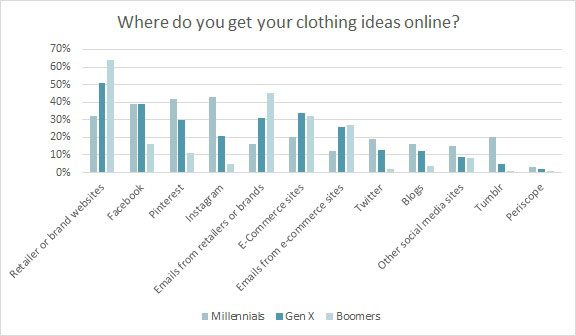 Clearly, endorsements by celebrities and influencers carry weight with shoppers. But Cision Inc., the PR software company, says influencer relationships should be viewed as dating — but with the view toward a long-term commitment. It advises brands get to know their influencers by reading their blogs, listening to their podcasts and watching their videos, etc. To further build the relationship, Cision’s suggestions include thanking influencers their work, communicating with them regularly to find out what’s meaningful to them, sharing their content to build new audiences and meeting with them face-to-face.

As Joey Kotkins, now-partner at Multiple, a London-based business consultancy, told the Social Media Week audience, “When you get the perfect merging of content and influencer and brand, the results can be huge.”

How the East is Won