Sometimes there are major markers in life, events so big that life becomes divided into everything “before” or “after.” We’re living through that now. When this story was originally scheduled, it was supposed to be taking a look at the changes in online apparel shopping over the past couple of years. Since that time, a global pandemic slammed the breaks on seemingly everything but sales of toilet paper and hand sanitizer. Like a terrible tsunami, the COVID-19 virus has rolled over country after country, driving everyone off the streets and away from each other. In the eerie quiet, social distancing has quickly gone from a term no one knew, to a worldwide practice. At first, it seemed fortunate so many retailers had ecommerce capabilities. But economic uncertainty, fear and confusion have undermined that — for now.[quote]

Many stores have temporarily closed their doors. And some, like menswear giant Tailored Brands, Victoria’s Secret, TJ Maxx and Marshalls, as well as Reformation and others have halted their ecommerce business out of concern over spreading the coronavirus through their distribution warehouses.

Those brands and retailers that continue to sell online must tread carefully, experts say. And by that, they’re referring to messaging. Pushing product using the planned marketing campaign would come off as tone deaf. But tapping into the fact that people are in lockdown can come off as exploitative.

Edited’s Rebecca Milne, research and analysis director, says this is a time when brands and retailers can use their online presence to better connect with their consumer and build a stronger sense of community.

“Efforts in this area are going to help with brand loyalty,” she says. “You’re speaking to an audience going through the same worries and problems that you are, and there are two routes you can go down with that: one being providing light relief and one providing a voice that’s more in the direction of social responsibility. Identify which of those is more applicable to your brand and explore it. Because people are spending more time inside there’s opportunity to really fine tune your community and connections with your customer.”

Stay-at-home orders in much of the country mean consumers have a lot more time to spend on the internet. But even before this pandemic, apparel shoppers were already spending more time online than they were a couple of years ago. For instance, in 2018, shoppers spent as much time browsing for clothing ideas in a physical store (50 percent) as they did online (50 percent), according to the Cotton Incorporated Lifestyle Monitor™ Survey. But in the January 2020 Monitor™ study, there was a significant shift and those browsing online surpassed those who were “just looking” in stores (54 percent versus 46 percent). 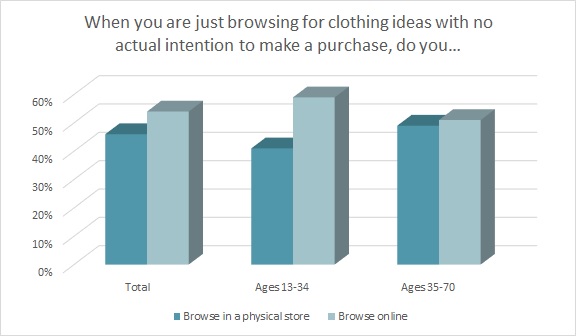 After the COVID-19 outbreak, Macy’s, Kohl’s, and JC Penney announced they were temporarily closing all of their brick-and-mortar locations and serving customers online. By contrast, Amazon is adding 100,000 workers to handle the surge in ecommerce orders and deliveries. Walmart announced it planned to hire 150,000 workers. Walmart was also setting up federal COVID-19 testing sites at limited Supercenter locations to serve first responders and healthcare workers who may have been exposed to the virus. Target is also keeping stores open, and the Target Foundation is giving $10 million to expand relief and assistance to its team members, as well as organizations responding to the pandemic.

Both Target and Walmart have reduced their store hours. But added employees at Walmart and increased pay at Target are needed to handle the demand for in-store, online, and buy-online-pickup-in-store (BOPIS) orders.

“Covid-19 will change and has changed the way people will shop, what they’re shopping for and how they’re shopping,” Milne says. “E-commerce is naturally a channel that comes into focus more. For the foreseeable future, customers will be more comfortable making their purchases online. This could lead to longer-term adoption of shopping online for those who maybe didn’t do it so much before. In reality, people won’t be visiting stores in the same way for some time. Government advice is avoid crowds. People aren’t going to be rushing to their local high street or mall, not only for that advised time period, but also the sentiment is going to linger. It’s not going to vanish overnight. With this in mind, retailers should really be thinking about upping their mobile usage. And when there is a return to normality, retailers will then face the challenge of hooking people back into stores.”

Two years ago, 44 percent of consumers said the ability to shop/browse clothes online changed the way they bought clothes, according to Monitor™ data. That figure has jumped significantly to 52 percent. Among those Millennials and Gen Z, the number climbs further to 65 percent.

Oberlo, an online marketplace, predicts that by the end of 2021, 73 percent of ecommerce sales will take place on a mobile device. Additionally, while 13 percent of U.S. smart speaker owners said they made voice purchases in 2017, the firm expects that number to grow to 55 percent by 2022. Oberlo also thinks ecommerce features on social platforms like Instagram and TikTok will boost the number of social shoppers.

Edited’s Milne says brands and retailers should look to engage with consumers online to maintain their relationships during this crisis. Citing the example of the Shanghai-based firm Forest Cabin Cosmetics, she said the beauty company had to temporarily close half of their 337 stores in China.

“Their sales initially dropped around 90 percent but they then used live streaming to engage with their consumers,” she says. “It was reported on the news that they were able to increase their sales by 45 percent year-over-year through those initiatives. There’s some really nice examples of things that have happened for people who have been able to weather the storm by being creative, pivoting their strategy and embracing ecommerce and online, even if that isn’t your core business model.”