With the major adoption of athleisure here in the U.S., it would be easy to think joggers and leggings are the top fashion bottom worldwide, edging out even that perennial favorite: denim. Despite the challenge, however, consumers around the globe continue to be drawn to jeanswear, driven as much by its classic appeal as newness in the category.[quote]

One of the top reasons for growth is the addition of stretch to both men’s and women’s jeans.

Cohen credited stretch with helping boost sales of women’s denim 5 percent to $16.4 billion in the year ending July 2018. Between 2011 and 2017, the percent of denim jeans that contains stretch in the U.S. increased from 44 percent to 75 percent, according to Cotton Incorporated’s Retail and Lifestyle Monitor™ surveys. In China, the percentage increased from 26 percent to 56 percent.

The world market for denim jeans grew an impressive 8.9 percent between 2013 and 2018, from $52.6 billion to $57.3 billion, according to a global market review published by Just-Style. It is expected to reach nearly $60 billion by 2023. Jeans account for more than 75 percent of all denim, with jackets, shirts, skirts, dresses, shorts, and other items rounding out the remainder of the category, according to a study by Prescient and Strategic (P&S) Research.

The Just-Style study says the United States ($20.1 billion) and Europe ($19.75 billion) account for 69 percent of the world’s total value share in jeanswear, even though the population of these two continents represents less than 15 percent of the world’s total. While North America and Europe have dominated the global denim market, the review shows the fastest growth is expected to come from Asia, South America, and “the rest of the world,” which means predominantly Africa.

While 55 percent of U.S. consumers “love or enjoy” wearing denim, the figure increases significantly among shoppers in China (65 percent) and Latin America (77 percent), according to the Monitor™ research, and CCI and Cotton Incorporated’s Global Lifestyle Monitor™  Survey.

Other countries have a growing interest in wearing denim because, as P&S Research maintains, “The penetration of western fashion and western life style has accelerated the casualization of clothing across the globe. It has boosted the adoption of casual fashion apparels like denims, dresses, shirts, tees, and casual shirts among working as well as non-working-class groups. Also, the changing perception of executive wear in corporations due to casualization, is driving the demand for denim products, globally. The change in perception has led to acceptance of denim, including jeans, as business casual attire for the working class.”

Among Chinese consumers, denim jeans are worn the most when going out to dinner and running errands (both 28 percent), according to Global Monitor™ research. That’s followed by work (24 percent).

In Mexico, denim is the preferred bottomswear for work (49 percent), running errands (32 percent), going out to dinner (29 percent), looking stylish or fashionable (28 percent), and hanging out at home (22 percent), according to Global Monitor™ Research.

The Mexican consumer owns more pairs of jeans (8) than U.S. (6) and Chinese (4) shoppers, according to the Global Monitor™ research. Mexican consumers also wear their denim more often than those in the U.S. and China (5 days per week versus 3).

It’s clear that Mexico has a strong appreciation for denim. Nearly all consumers there (98 percent) own at least one pair of denim jeans, according to the CCI and Global Monitor™ survey. And nearly one-fourth (23 percent) wear jeans every day of the week. Mexico is one of the largest manufacturers of denim and the fabric has a strong cultural heritage within the country. Brands and retailers can draw on the country’s cultural and economic affinity for denim to market new garments to its consumers.

Here in the mature U.S. market, at least two-thirds of consumers would be willing to pay more for denim jeans that fit them perfectly (87 percent), were higher quality/lasted longer (79 percent), were custom made to their fit and style (70 percent) and kept their shape all day long (69 percent), according to Monitor™ research. 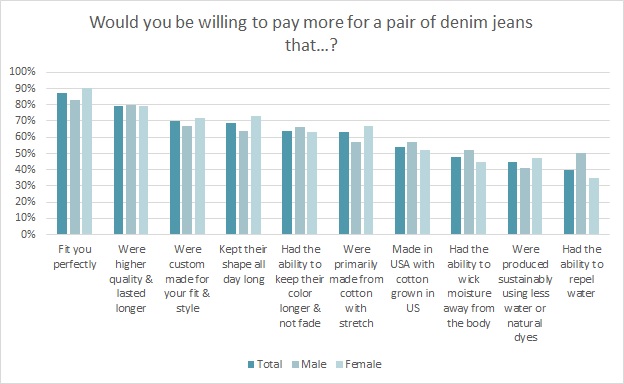 While denim makers have responded to the consumer desire for comfort by adding stretch, there are other athleisure-inspired features they can add to give denim even more appeal. For instance, 64 percent of consumers are interested in moisture management in their clothing. Yet, moisture management is only available in 9 percent of the clothing at retail, according to Cotton Incorporated’s Retail and Lifestyle Monitor™ studies. Additionally, 61 percent are interested in thermal regulation, yet it has just 2 percent retail availability.

Its staying power proves denim can transform and evolve to meet customer desires and expectations. And the Just-Style review says no time is more important than now to rise to the challenge.

“Fashion retailers do not have the resistance that prevents them being toppled,” the review states. “Jeans executives in brands or own-label retailers cannot relax.”