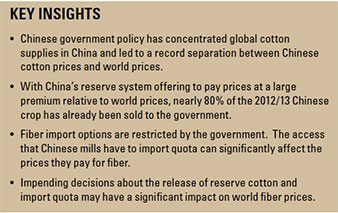 As the world’s largest cotton grower, consumer, and importer, China has long been at the center of the global cotton market.  Since the spike in fiber prices that occurred during the 2010/11 crop year, China has become even more important to discussions of cotton prices.  A principal reason for China’s commanding influence in the market has to do with government policies, which are expected to result in China holding half (50%) of world cotton stocks.

With the bulk of China’s cotton supply being held by the government, any decisions involving Chinese stocks should have a major impact on global price direction. Developing an understanding of Chinese cotton policy and learning how decisions made in China could affect the world cotton market are essential to stakeholders throughout the cotton supply chain.

Chinese cotton policy functions through the operations of two primary tools: government reserves and import quota. Traditionally, the reserve system has operated as a means of stabilizing Chinese prices and has acted to support both spinners and growers. However, recent operations have tilted in favor of growers. Much of this shift resulted from the introduction of a minimum guaranteed price in March of 2011–coinciding with the peak in global cotton prices. Higher fiber prices in China can be a burden on spinning mills and put upward pressure on prices downstream in Chinese supply chains.

Fiber prices in China, largely influenced by government policies, resulted in record premiums relative to the A Index.  Between the 2004/05 and 2009/10 crop years, the average difference between Chinese mill-delivered prices (CC Index 328) and the A Index was 19 cents/lb.  Thus far into the 2012/13 crop year, the difference has averaged 53 cents/lb.  The record gap between Chinese prices and world prices has challenged the ability of Chinese spinning mills to compete in the global yarn market and has been a likely contributor to decreases in Chinese cotton consumption over the last several crop years.  Relative to 2007/08, the forecast for Chinese consumption in the 2012/13 is 15.5 million bales lower, representing a decrease of over 30% in use among Chinese mills in five years.

This crop year, purchasing by the reserve system has far outpaced purchases from last year.  At the time of publication (late-January 2013), a total of 25.9 million bales (5.8 million tons) of the 2012/13 crop had already been purchased.  This figure is nearly double the total amount purchased in the entire 2011/12 crop year.  The importance of the volume of reserve purchases in the current crop year becomes apparent when considered within the context of the Chinese cotton harvest.  The USDA forecasts that the 2012/13 Chinese harvest will reach 33.5 million bales. The USDA’s projection, coupled with the expectation that Chinese mills will consume 35.5 million bales implies that nearly 80% of this year’s crop has already been moved into government warehouses.  Because the cotton purchased by the reserve system can be withheld from the market and China is still the world’s largest consumer of cotton fiber, a major question for the global cotton market is how the government will decide to supply their mills–through sales from reserves or imports.

To enhance the effectiveness of the reserve program, in terms of its impact on domestic prices, the Chinese government also enforces an import quota system.  The Chinese import quota system allows for cotton to be brought into the country under three options; WTO-related tariff-rate quota (TRQ), sliding-scale tariff, and 40% flat rate tariff. It is accepted that the WTO-related amount will be imported this year. 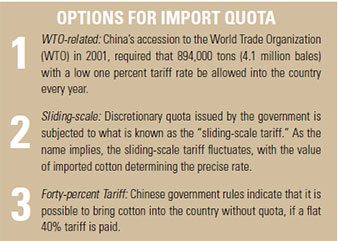 While there is transparency regarding the different choices for importing cotton under the quota system, the process of quota allocation is unclear.  For both the WTO-related and sliding-scale options, the Chinese government makes a decision on which mills have access and the factors in this decision are not public knowledge.  Since Chinese cotton prices are almost always higher than international prices, access to imported cotton can greatly affect the competitiveness of Chinese spinning mills. Among the firms, which are eligible to obtain cotton from the import quota policy, are state trading enterprises, the reserve system, mills that have at least 50,000 spindles, and exported-oriented mills, known as the “processing trade.”

Last crop year, the Chinese government decided to supply mills primarily through imports, and a record volume of imports (24.5 million bales) were brought into the country. At the time of this publication, no details have been released from the Chinese government regarding import quota in the 2013 calendar year.  Nonetheless, there have been a series of speculative reports indicating that the volume of import quota will be tied to the volume of cotton purchased from reserves.

Chinese cotton policy has global consequences, with the most direct link being through imports.  This crop year, the USDA has assumed that China will supply mills through a combination of imports (12.5 million bales, about half of 2011/12 volume) and releases from reserves.  Unofficial statements appear to confirm this assumption.  However, no formal announcement from the National Development and Reform Commission (NDRC), the agency responsible for managing both reserves and import quota, has been made about the volume that will be released from reserves or the amount of import quota that will be released.  Any future announcements may have a significant impact on world cotton prices.

Beyond imports, Chinese government policy and the world cotton market share some less direct links.  While import quotas are in place for cotton fiber, there are no quotas affecting yarn.  As a result, Chinese fabric manufacturers can import cotton yarn without restriction.  With high domestic fiber prices putting pressure on domestic yarn prices, demand for yarn imports has increased.  Pakistan and India have been the largest suppliers of Chinese yarn imports, providing 40% and 20%, respectively.  The rise in fiber demand within countries that provide China with yarn could affect fiber prices in those countries, if their domestic supplies become scarce.

Given the influence of Chinese cotton policy on the world fiber market, it is important to track developments related to reserves and import quota. Stakeholders throughout the cotton supply chain can stay current on the latest developments through Cotton Incorporated’s Monthly Economic Letter.