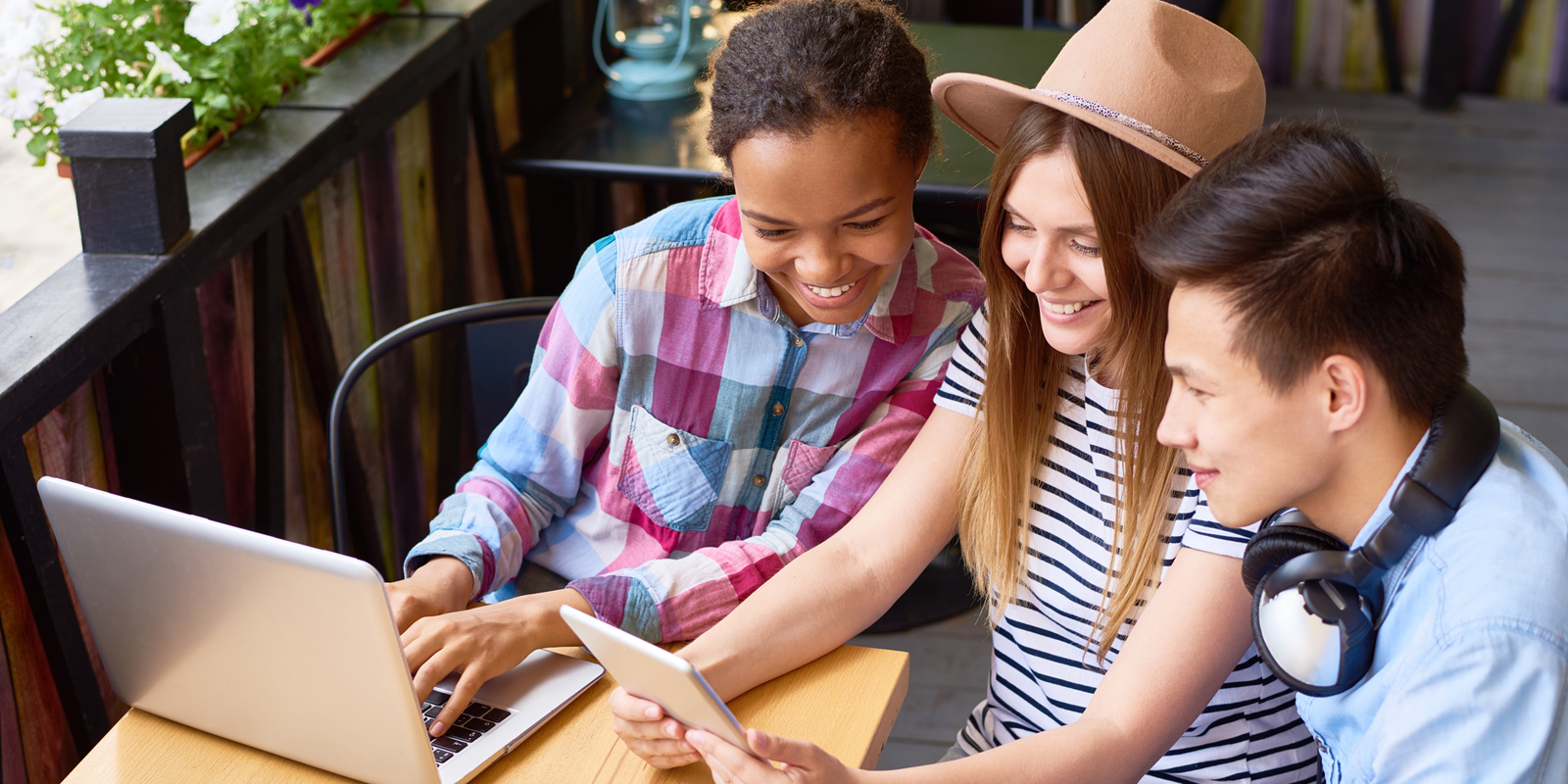 There’s a funny video circulating that shows a baby with a magazine. But instead of trying to turn the paper page, the baby starts swiping to get the image to change. To an adult, this might seem so cute because, “Hey, the baby thinks that’s an iPad.” But for the baby, it’s a frustrating experience.

"If you were born After Google, after 1997, you have literally been raised on a diet of immediacy and information...Everything's accessible in an instant. Those consumers come out of the womb today wired and born for the Internet."

And that right there shows the difference between digital immigrants and digital natives, the latter being Gen Z, or those born from around 1996 through 2010. To Gen Z, a magazine is a broken iPad, says Ken Hughes, speaker and founder of Glacier Consulting. He spoke at the recent Retail Innovation conference in New York.

“In retail, our job is not to be a magazine,” Hughes said.  “We build our businesses and kind of hold onto the old ways. We think it’s cool, but actually it’s not. So this race for relevance is what your business success should all be about. As long as you hold onto relevance, as long as your brand, your business and your approach is relevant to that next consumer generation, you will survive.”

The good news for the apparel industry is that Gen Z consumers like to shop for clothes. Apparel shopping (32 percent) is second only to electronics (33 percent) among their preferred items to shop for, according to the Cotton Incorporated Lifestyle Monitor™ Survey. Those items far outpace cosmetics (11 percent), shoes (6 percent), and fashion accessories like belts and handbags (3 percent). 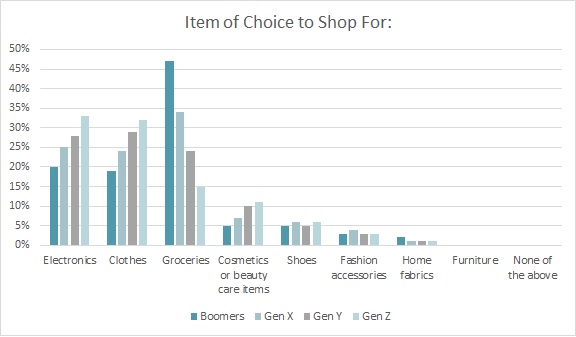 Gen Z is significantly more likely than older generations to prefer to shop for apparel. While it’s still a top choice among Millennials (29 percent), the younger shoppers prefer it more. The number drops to 24 percent for Gen X and 19 percent for Boomers, both of whom most prefer to shop for groceries (Boomers – 47 percent, Gen X – 34 percent).

Now 8-to-22, Gen Z will account for 40 percent of the population and become the largest consumer group in both the U.S. and Europe by 2020, according to a study from ad agency Barkley. The study also refers to Gen Z as the Pivotal Generation, meaning they pivot away from past generations to have a unique identity all their own. Pivotals, says Barkley, hold up to $143 billion in direct buying power, with the potential to impact more than $665 billion in family spending.

While Hughes emphasizes the importance of staying relevant with this crowd, it isn’t as easy as using a few new slang phrases in a marketing campaign. Doing so could backfire and land you with the awkward “try-hard” label. Barkley explains that Gen Z influences each other, their parents, and families. And those they admire are “real” people with “real content.”

“They trust messages from ‘people like me’ — often their favorite social media influencers — over celebrities,” according to Barkley’s study. Additionally, “Pivotals expect value and excellence from every shopping interaction. They don’t have time to waste on brands that don’t offer both.”

As much as instant gratification was always a characteristic of the young, the always-on WiFi culture that defines Gen Z has blown that up even more. Hughes explains its genesis through a new time measurement called BG and AG: Before Google and After Google.

“If you were born After Google, after 1997, you have literally been raised on a diet of immediacy and information,” he said. “Everything’s accessible in an instant. Those consumers come out of the womb today wired and born for the Internet.”

And that wired readiness translates into online shopping. Gen Z consumers are significantly more likely to browse for and research clothes online than other generations. Compared to last year, 50 percent of Gen Z shoppers say they plan to do more clothing research in the upcoming year, according to Monitor™ research. That compares to 39 percent for Millennials, 30 percent of Gen Xers, and 13 percent of Boomers. Additionally, 46 percent of Gen Z consumers plan to browse more in the upcoming year. That’s far more than Millennials (32 percent), Gen Xers (30 percent), and Boomers (15 percent).

When they’re online, the majority of Gen Z shoppers get their clothing ideas from Instagram (58 percent) and Pinterest (40 percent). And of the top sites to browse for clothes, these young consumers list Amazon at the top (48 percent), followed by Forever 21 (28 percent), Walmart (22 percent), and Macy’s (15 percent), according to Monitor™ research.

When shopping for clothes online, the Monitor™ research shows factors that have the most influence on the purchasing decision are defined or detailed sizing information (65 percent) and customer reviews (61 percent).

Online reviews, as well as sharing their opinions and experiences on social media are part of what makes Gen Z one of the most collaborative generations ever, says Hughes. They practically feel it’s their right to collaborate with brands to build a better product or business. Rather than take it as criticism, Hughes advises businesses listen.

Brands and businesses must also be flexible. Hughes cited Ford Motors and Hilton Hotels as two long-time, heritage businesses that are now rivaled by Uber and Airbnb, operations that are not yet a decade old. To that end, apparel renting services like Le Tote and Rent the Runway are inspiring traditional stores to innovate. Ann Taylor launched Infinite Style by Ann Taylor, an online subscription rental service, and Rent the Runway teamed with Neiman Marcus to have a shop-in-shop at the department store’s San Francisco location.

Neiman Marcus is also taking Gen Z’s penchant for customization to heart, with the recent launch of its “Idea Factory” in select stores. It will “unleash an array of concepts, products and experiences — from piercing and personalizing of fashion products, to candle-making, epicure and custom-mixing beauty creams.”

Hughes says brands and retailers can take any point of the customer journey and personalize it. In fact, he says, at this point in retailing, “it’s customize or die” because the youngest shopper wants personalized product unique to them.

For established or traditional retailers, some of these changes might seem bewildering and complicated. But Hughes says the Gen Z consumer is like the blue dot on Google Maps that signifies the user, telling them instantly where they are and everything that’s around them, as opposed to the consumer of old, who had to use a map to figure out where they were, and then trace the route to their destination.

“The new world is run by the blue dot consumer. They stand perfectly still at the center and everything else revolves around them,” he says. “If they take a step left, your business, brand or industry has to take a step left. That’s the metaphor you need to keep with you. If you keep that shopper centered, you will succeed.”

All Lines Are Not Created Equal

A Tale of Two Generations

Catering to the In-Betweens