When it comes to buying new clothes, what used to be called a shopping trip is now a whole journey. See, even though most consumers prefer to buy their apparel in stores, the process starts a lot sooner than that thanks to email, social media, websites, mobile notifications, and more. And it takes more work than ever to lure customers from their devices and into the store to complete their shopping journey.[quote]

“I think you can have a successful business without a storefront,” says Noah Zagor, founder of Meyvn’s, the upscale men’s wear shop in Chicago. “But a store gives you a showpiece. It’s a selling place but also sort of an exhibit, where consumers can see the brand in a holistic, 360-degree sense. And a good store lets you grow your local customer while you’re doing your whole big ecommerce thing. So online supports the store and the store supports online and it’s all connected and feeds off itself.”

The digital component is crucial to retailers, and not solely for mobile or desktop purchasing. In a report titled, “The New Digital Divide: The Future of Digital Influence in Retail,” consulting firm Deloitte has found digital interactions influence 0.56 cents of every dollar spent in store, or $2.1 trillion dollars. However, the firm says retailer ability to influence during the purchase journey has decreased due to the influence of digital platforms like Pinterest, which operate at a large scale and can be more connected to what a customer actually wants when they want it. 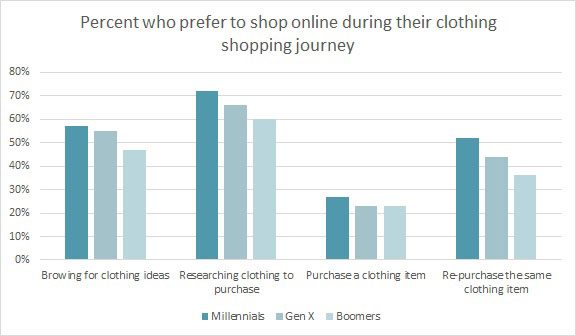 Zagor says Millennials are less likely to come into the store to shop, but they will come in to experience it. “I think the younger customer visits these places like meccas,” he says. “They treat it like the genesis of something cool. But they spend most of their time interacting with the brand online.”

Zagor uses a variety of methods to get customers to visit his shop, from digital components to the shop’s actual design.

“You have to have strong ecommerce,” he says. “You have to create editorial, have great photography. You have to have good writing — or at least relatable writing. You have to have constant product coming in; it’s not just about seasonal collections but also about drops, especially with the sneaker culture infiltrating into fashion. Sneakers come out every month or even every couple of weeks. So with the streetwear brands that get wrapped up in that cycle, they too are dropping a couple of T-shirts, then a hoodie, and then a hat. And the online customer craves that.”

To keep his in-store experience alive, Zagor and his partners — producer and DJ Tony Kim, and 3D designer and woodworker Ryan Bardsley — created a space with a gallery feel featuring blonde wood, stone and concrete. “When people come to visit us, we don’t want them to be let down and think, ‘Oh, I didn’t have to come here. I could have just looked at this online.'”

Meyvn carries both major designer labels that do very well online, as well as smaller niche brands that captivate the in-store shopper. “They create clothes with beautiful textures, prints, and graphics. And people come into the shop to discover those brands because they can touch, feel and really interact with them.”

Consumers shop for clothes in stores about twice per month versus once per month online, according to the Monitor™. Yet they spend 105 minutes shopping online each month versus 94 minutes in physical stores.

When considering the online versus in-store dynamic, Google found an interesting pattern with Target. In a Think With Google trend report, it was noted that Target realized 98 percent of its guests were shopping digitally and 75 percent were starting on mobile.

“But in categories like patio furniture, its in-store and online teams were still operating and marketing separately, even as more than 50 percent of their sales in the patio category were coming through Target.com,” the report found. “The company looked at it from its customers’ point of view. Guests might search on smartphones for patio furniture, then see completely different merchandise when they came into their local store. So Target merged its online and offline marketing and merchandising teams into a single unified patio team that was mobile-first. It decided what products and signage to feature in-store based on digital demand.

While Google’s example has to do with hardgoods, as opposed to apparel, the initiative might be seen as a viable option by any retailer. Especially since 45 percent of consumers who get apparel ideas online get them from a retailer or brand’s website, according to the Monitor™ data. That figure jumps to 64 percent among Baby Boomers and 51 percent for Gen X.

It would also behoove major retailers to coordinate their online and in-store marketing and merchandise supply, as 24 percent of consumers say they shop for most of their clothes at mass merchants, followed by chains (22 percent), department (14 percent) and specialty stores (10 percent), according to the Monitor™.

In Deloitte’s report, the firm concluded that despite challenges, it’s quite optimistic about the future of traditional brick and mortar retail. The firm says retailers might partner with platforms where customers are already interacting in large numbers — both so they don’t have to build such models on their own and so they have access to the platform’s detailed real-time customer data.

Deloitte the primary source of differentiation and competitive advantage in today’s environment will be “leveraging the store footprint to help customers find, select, purchase, and receive products. Most importantly, to drive sales growth, retailers should refocus on innovating around product offerings and the customer experience.”