Not only is it beginning to look a lot like Christmas, but it’s also finally the right season for it (we saw you, Amazon, launching Black Friday deals in early October). Yesterday, the Fifth Avenue Association kicked off the holidays in New York City with its “Fifth Season” event, an experiential celebration that brought holiday décor, music, and festivities together to herald the shopping season along the city’s iconic avenue.[quote]

Of course, the biggest holiday shopping days — Black Friday, Cyber Monday, Small Business Saturday, etc. — are yet to come, and Holiday 2021 is expected to be very strong. But with COVID still hovering over daily life, stores and brands would be better off betting on a strong omnichannel approach for the rest of the holiday season, than banking on any particular day carrying them into the black.

The National Retail Federation says this year’s holiday spending “has the potential to shatter previous records.” It’s forecasting sales for November and December to grow between 8.5 percent and 10.5 percent over 2020, to between $843.4 billion and $859 billion. That’s up from 2020’s 8.2 percent increase to $777.3 billion.

A BlackFriday.com survey shows in-store shopping will be making a comeback this year, with 77 percent of respondents “ready to go the retail route” if their store of choice is open and/or the deal they’re seeking is not available online. The company’s survey also shows 52 percent of consumers say they’re likely to shop Black Friday sales events either in-store or online. And Cyber Monday should see an increase to 61 percent from 59 percent in 2020.

These increases are expected in spite of the fact that gift givers have been coaxed to buy early lest their presents get caught up in supply chain issues or shipping delays.

Among consumers who plan to buy holiday gifts online, the majority plan to shop during Black Friday (47 percent) and Cyber Monday (43 percent), according to the Cotton Incorporated Lifestyle Monitor™ Survey. Last year, when more COVID restrictions were in place, significantly more consumers (48 percent) planned to shop on Cyber Monday. About the same number (48 percent) planned to shop on Black Friday.

Ecommerce shopping is bound to be affected this holiday because Amazon’s Prime Day was held back in June. In 2020, Amazon held its mega shopping day in mid-October. That lead 43 percent of shoppers to say they expected to buy holiday gifts on Prime Day, according to Monitor™research. This year, with the shopping event having been held nearly half a year ago, the percentage who used Prime Day to buy holiday gifts dropped significantly to 33 percent.

On the other hand, 56 percent of consumers expect to shop in-store for holiday gifts this season, a significant increase from 44 percent last year, according to Monitor™ research. In fact, nearly three-fourths of holiday shoppers (74 percent) believe stores should be open on Black Friday 2021. And 58 percent say stores should be open Christmas Eve. More than half of shoppers (51 percent) say they plan to shop in-store on Black Friday. That’s followed by plans to shop during the week leading up to Thanksgiving Day (39 percent), Christmas Eve (25 percent) Small Business Saturday (22 percent), Thanksgiving Day (17 percent), and after Christmas (16 percent). Nearly 1 in 5 (19 percent) say they do not plan to buy any holiday gifts in-store this season. 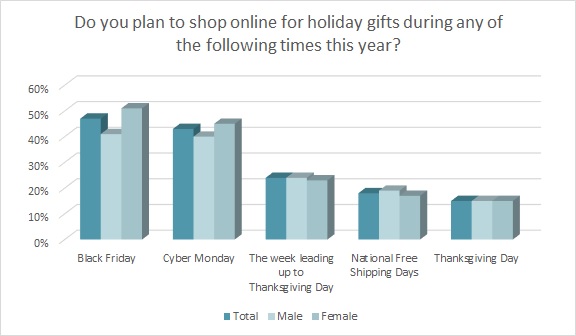 In RetailNext’s first “Fireside Rants” webinar, Lauren Bitar, head of insights, said early promotions and in-store decorating made it seem like Black Friday took place before Halloween this year. However, there are still a lot of shopping days to prepare for, both in-store and online. Among brick-and-mortar retailers, Bitar said recent traffic has been “pretty much neck and neck” for both enclosed and outdoor malls.

“Indoor malls stores were up about 30 percent [compared] to 2020, with outdoor up about 28 percent,” she said. “As much as we want to make sure the indoor spaces will be safe, I think it’s encouraging that shoppers aren’t necessarily shying away just because stores are in a mall. The demand is across store types.”

To continue to foster relationships with their shoppers, stores also have to be transparent about any concerns that could crop up regarding stock outs or shipping delays, Bitar says.

“My recommendation is to send out emails with what you think your deadlines are going to be for your customers,” she said. “Also, send reminder emails like, ‘We’re approaching this deadline,’ or ‘You’ve missed this deadline for shipping so you can take advantage of buy online, pick up in-store or curbside.’ And if a shopper is in a store and something isn’t in stock, referring them to another of your stores is a huge way to save a sale and have a good experience. All of those things are really helpful toward just being transparent. And they allow you to tell your shopper, ‘I’m going to be wherever you want to be.'”

A new study from Avery Dennison and GWI, the audience insight company, found that to remain relevant in the post-COVID environment, fashion retailers must embrace omnichannel or become obsolete. The survey found that more than 90 percent of fashion buyers in the U.S., UK, France, Germany, and China want technology-based solutions to improve their retail experience. Further, over three-quarters of fashion shoppers want retailers to offer more tech solutions in-store — with self-checkout (32 percent), curbside pickup (26 percent), and mobile payment compatibility (22 percent) topping the list. Brands looking to connect with shoppers during the holidays should keep in mind that more than half of those surveyed said receiving a personalized offer on their phone would increase their likelihood of visiting a physical shop. And 44 percent said digital experiences, like the ability to scan a QR code for product information, would also improve the possibility they’d shop in-store.

“With the prospect of consumers seeking to shop early, inventories may be pulled down sooner and shortages may develop in the later weeks of the shopping season,” Kleinhenz says. “However, if retailers can keep merchandise on the shelves and merchandise arrives before Christmas, it could be a stellar holiday sales season.”

Sustainable ClothingHow Retailers Can Up Their Digital Gifting Game