Mass Takes A Few Cues From the Higher End

Somewhere between the Wall Street bailout and today’s new economy — where consumers are saving more and spending less — shoppers started turning more and more to mass merchants for their apparel purchases.  But even though these big box stores feature value at every turn, some higher-end ideas are trickling down to help the merchants differentiate themselves.

"Stores realize just because you're offering the lowest prices doesn't mean you can be dark, dirty and dank. "

“I recently heard the term ‘mass-tige’ used in describing mass merchandise items that are appealing, have cache and are affordable,” says 5+design’s Michael Ellis, partner.  “Walmart’s biggest selling point is, ‘We are going to be the cheapest,’ which isn’t a bad approach. But if you think you can’t compete with Walmart on price, you have to decide how you’re going to differentiate yourself.  Design plays a role and that’s trickling down from the luxury stores. There also has to be a stronger emphasis on the customer experience.”

For Walmart, low prices still remain top of mind among its constituents.  But it recently improved its home goods offering and increased its private label.  The retail giant is also boosting its U.S.-made products, including apparel.  Currently, mass merchants carry just 1% of U.S.-made apparel, according to the Cotton Incorporated Retail Monitor™.  But Monitor data reveal 69% of mass merchant shoppers 38% of consumers say apparel made in the U.S. is better quality than imported apparel.

More than half of all consumers (51%) say they “love or enjoy” clothes shopping, up from 48% in 2011, according to the Monitor.  The challenge for mass merchants is keeping that love alive without raising prices.

“Merchants will always try to bring better, more upscale services and amenities into their stores,” Corlett says.  “The challenge is they don’t want shoppers to think they’ll be paying mall prices.  I think we have seen a lot of progress in terms of space, color and more pleasant lighting.  They’ve learned about that from department stores and malls.

“But even though they can’t have valet parking and fine dining like a mall, they could make eating areas more attractive and have better food options,” she continues.  “We’ve seen upgrades overall, though.  Stores realize just because you’re offering the lowest prices doesn’t mean you can be dark, dirty and dank. ”

Attractive stores and better merchandise can keep customers coming back — and spending more time there.  Currently, consumers shop for apparel in-store about twice per month, devoting about 100 minutes to those visits, according to Monitor data.

Liz Crawford, author of “The Shopper Economy” and vice president of insights at Match Drive, says Target has the cache factor going for it among mass market apparel shoppers.

“Target is known as a clothes shopping destination, with apparel and accessories accounting for about 20% of sales, compared to Walmart’s 7%,” Crawford says.  “Target’s strategy of co-opting celebrity designers has earned it the reputation as a taste maker in the under $100 category.  More recently, it maintained its image by borrowing cache from names like Prabal Gurung and Kate Young.  That’s a quantum leap in sophistication from Walmart’s Brooke Leigh line.  The Walmart shopper is looking for a nice, well-made top that doesn’t cost too much.  That is completely legitimate, but a very different proposition from Target.” 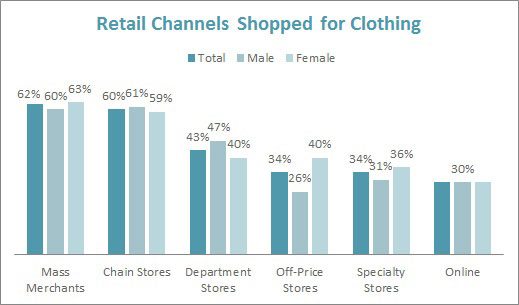 Target’s strategy is compelling to shoppers; 37% of consumers say they are likely to buy clothes at a store offering exclusive garments designed by a well-known designer, according to Monitor data.

But consumers will not purchase on star power alone, citing fit (77%) and comfort (68%) as the top two factors to buying clothes, followed by price (59%), the Monitor survey finds.

That is not to say any price will fly.

“Target has to walk such a fine line,” Corlett says.  “While they do own the ‘Tarjay’ strategy, they have to be very careful not to overdress their stores because their major thrust right now is to get more shoppers to buy more groceries.  Their reputation for glamor and cache works against them if people aren’t sure they’re getting the lowest price.  Shoppers on a tight budget would rather save 25 cents on milk than have wooden fixtures or better lighting.”

Ellis says mass market retailers can stand out through technology and apps.

“Walmart is investing huge amounts in self check out,” he states.  “And both Walmart and Target have shopping apps that bring convenience without adding more employees to their costs. That’s how they’ll have to go, because they’ll still need to be perceived as offering value.”

Adds Crawford: “In mass apparel, mastering convenient — and even fun — self-serve will spell competitive advantage in the years ahead.”