Walk past any apparel store, look at most any Instagram fashion feed or check out a women’s runway show and it becomes clear that the sizes displayed do not reflect the majority of American women. Yet retailers are scratching their heads wondering why thousands of stores will be closing this year? The average American woman wears a plus size but the industry seems almost tone deaf when it comes to marketing to her. The smart brands, though, see this opportunity and are making it their business to reach her specifically — not just add her sizes as an afterthought.

This marketing shift is imperative for the fashion industry. Consider that a handful of years ago, the Centers for Disease Control revealed a groundbreaking statistic: the clear majority of American women — 67 percent — wears a size 14 or larger. That was followed by an update in 2016 from the International Journal of Fashion Design, Technology and Education that says most actually wear a size 16-to-18 or larger.

Yet of the roughly $120 billion U.S. women’s apparel market, plus sizes accounted for just $21.4 billion in 2016, according to the NPD Group. A separate NPD study showed the percentage of U.S. teens buying plus size clothes jumped from 19 percent in 2012 to 34 percent in 2015.

This jibes with research done by activewear maker Puma.

“The activewear industry is not targeting the plus size consumer,” said Puma’s Donna Martin, director of merchandising, at a panel discussion sponsored by Edited. “We have data that found [our customer’s] average age went down when we offered plus sizes, which was the antithesis of what senior management thought was going to happen.”

So Puma went ahead and offered plus size activewear and discovered, “There is a consumer that’s eager to get this,” Martin said. “And of the products we offered, none of them had technical attributes, unless you want to call [stretch] technical. But they really responded because they really felt listened to.”

When plus women feel ignored by stores and brands, it shows in both their enjoyment of shopping as well as in how much they spend. About half of all plus size women (51 percent) says they “love or enjoy shopping,” which is significantly less than the two-thirds of non-plus size women, according to the Cotton Incorporated Lifestyle MonitorTM Survey. Additionally, plus size women spend about 32 percent less per month on apparel than their peers — $53 versus about $78. Over the course of a year, plus women spend $637 on apparel versus $934 among non-plus shoppers. [quote]

Puma’s Martin said targeted marketing made all the difference when the plus size line was rolled out.

“The retailer did an amazing job because of the models that were used and the way they styled the product. It was not just kind of having another size hidden in there,” she explained. “It was really authentic. Brands need to speak authentically to this consumer.”

The same was found in a study from the University of Mississippi titled, “The Role of Implicit Theories in Evaluations of “Plus-Size” Advertising,” by Melissa Cinelli and Lifeng Yang. The research discovered that shoppers could better relate to the apparel if larger models are shown to be wearing it.

“Perceived similarity to the model mediated female participants’ attitudes toward an advertised apparel brand,” the researchers stated. “In the context of targeting plus-sized consumers, then, these findings suggest that larger-sized models should be especially appealing to plus-sized consumers, to the extent that the consumer is able to see herself in the model.”

Therein lies an opportunity for the industry to appeal to this shopper. Consider that while 40 percent of non-plus women get their clothing ideas from store or window displays, the same holds true for just 34 percent of plus size women, according to Monitor data. The difference is even starker when considering the influence of the internet: 39 percent of non-plus shoppers get clothing ideas from online sources versus 29 percent for plus. And with fashion magazines, the difference remains significant: 21 percent for non-plus versus 11 percent for plus. 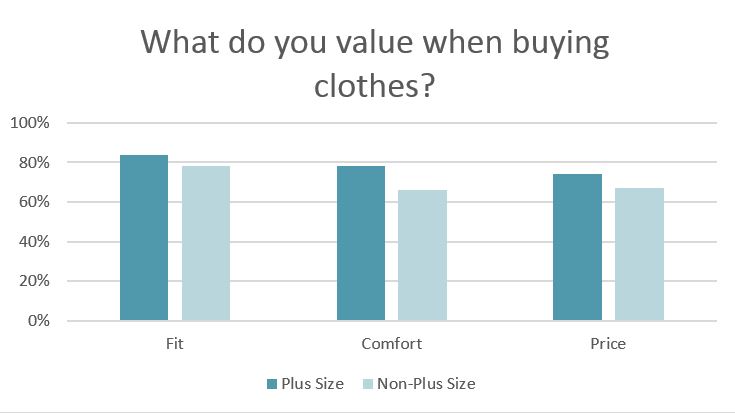 Eloquii’s Kelsey Foy, director of retention marketing for the online plus-sized retailer, says fit is “super important” in the plus size industry.

“You can’t just scale from a size 0 to a size 28. It’s going to be all wrong,” she stated at the Oracle + Bronto Commerce Marketing Spotlight in New York. Besides an in-house fit model and multiple fit sessions each week, the company holds Skype sessions to see what fits or to re-evaluate what can be improved if anything is returned. “If something doesn’t fit, that affects retention. We feel our emphasis on fit is pretty unique to us, so we want to highlight that in our emails.”

Eloquii also proves that plus women do care about fashion. Foy says the company uses SMS text messages to reach its diehard customers who suffer from FOSO — a fear of selling out.

“We have fashionistas that really fear missing out on a hot item. We wanted to leverage that in SMS,” she said. “So once a week we push out a super hot ticket item that we have low inventory on — but decent size availability so they don’t get frustrated that it gets sold out. Performance on SMS is hyper engaged and there’s high conversion.”

Puma’s Martin says the plus size shopper has a limited amount of disposable income and they “want to feel good about that spend.

“They need to feel like you are authentic to plus size fashion. It has to feel right and fit right,” she said. “And we’re getting requests for it so that’s definitely something we’re pushing now — both online and in brick and mortar as well. Consumers are demanding it, so we have to do it.”