Between the pandemic, which dramatically changed life as we knew it, and then changes to Apple’s cookie-based tracking rules, marketers have been handed more than enough challenges in the last year-and-a-half. Despite an uptick in social media usage, influencer marketing has also been impacted. But like so many other businesses, it’s learning to adapt.[quote]

The Influencer Intelligence report, “Measuring the Effectiveness and ROI of Influencer Marketing,” recalls that many influencers saw their sponsorship deals pulled, especially as events were cancelled.

“However, as the situation has evolved, many brands have seen that influencer-led marketing can continue at a time when commercial photo shoots cannot,” the Influencer Intelligence report states. “Equally, engagement on social media posts has been higher than normal over recent months as consumers have spent more time on social media. Consequently, in the sectors where it is possible, the influencer marketing industry has adapted. Nevertheless, most brands will have seen an impact on the ROI of their influencer marketing efforts this year, and the factors that determine success are continually shifting.”

Despite recent challenges, influencer marketing is growing significantly. Statista reports the market more than doubled between 2019 and 2021, from $6.5 billion-to-$13.8 billion U.S. dollars.

On the one hand, one might be skeptical of this rise in influencer appeal among fashion consumers, considering that when it comes to apparel, most people (64 percent) look to what they already own and like as their source of clothing ideas, according to the Cotton Incorporated 2021 Lifestyle Monitor™ Survey. But consumers also cite store displays (25 percent), people they see regularly (23 percent), family members (20 percent), social media sites (17 percent), TV shows, including streaming services and YouTube content (16 percent), and “online” (13 percent) as fashion sources. 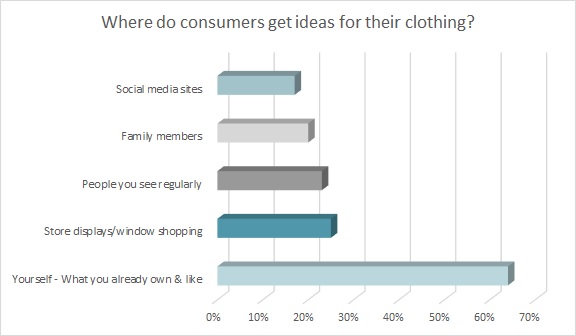 Kristen Wiley, founder and CEO of Statusphere, an influencer marketing company, says the need for product recommendations is growing.

“So, 92 percent of consumers trust earned media, like recommendations through family and friends above all other forms of advertising,” she said during Statusphere’s webinar, “Influencer Marketing Campaign Trends 2021.” “The stat makes sense, but it’s wild to think about when we consider how much money we spend on advertising. Which is why I think so many brands are taking their marketing dollars and moving them into influencer marketing, or what we also like to call word-of-mouth marketing, which is really just people coming in with that social recommendation.”

Wiley suggests brands can gain traction with influencer campaigns by creating a hashtag or an original song, and then investing in both big and micro influencers to support it.

“Guess has done several and they’re one I would definitely follow for cool trends,” Wiley stated. “They did the ‘In My Denim’ campaign. This was where they had people talking about how they feel in their denim, or even remaking stuff, and they tagged influencers who did it. Then they used the hashtag #loveGuess and they started doing a whole campaign around that as well. Over time, just by doing these challenges and keeping up with the content and all the UGC (user generated content) that was created, it had a snowball effect for them. They’re a great account to follow if you’re looking for inspiration.”

Wiley says Millennial and Gen Z social media users tend to post more authentic photos that aren’t perfectly posed, while brands can get so overly curated in their posts that they’re not relatable. That’s when influencer content could perform better, she says. Some other types of content that connects with viewers include before and after photos, where users swipe to see the after, as well as giveaways where the influencer offers something to their followers to garner engagement. Successful content varies by platform, too. For instance, educational how-to content does well on Instagram reels, while hashtag challenges and educational pieces work on TikTok.

Consumers say they get apparel idea from a number of social media sites, but it varies dramatically between generations. For instance, 73 percent of Baby Boomers and 76 percent of Gen X cite Facebook as a social media source for fashion inspiration, according to the 2021 Monitor™ research. Among Millennials, the number drops to 59 percent, while Gen Z, at 14 percent, has almost no interest in Facebook’s platform. Instead, the youngest set of consumers flock to Instagram (81 percent) and TikTok (66 percent), followed by YouTube (50 percent), and Pinterest (46 percent).

Right now, Baby Boomers still have the most spending power in the U.S., according to Visual Capitalist. But they’re the least likely generation to purchase a product they see on a social media site. The 2021 Monitor™ data shows only 10 percent of Boomers are somewhat or very likely to buy something from a social media site. Just 10 percent are likely. That compares to 41 percent of Millennials and 39 percent of Gen Z consumers who are likely to buy from such a site.

The Influencer Intelligence report says COVID pushed influencer marketing forward, and that only highlights the importance of being able to demonstrate the ROI of these efforts.

“Marketing budgets have been challenged more heavily than before, and there needs to be a reason for any spend,” states the Influencer Intelligence report. “Investing in an influencer simply because a brand feels they should, is no longer enough.”

The Influencer Intelligence report says 84 percent of respondents measure the success of their influencer marketing programs through engagement data such as comments, likes and content shares; traffic to the brand’s site; impression data; follower growth on social; lead referrals and sentiment data. ROI can be measured through trackable attribution, affiliate links and URL tracking. Additionally, the report says, discount codes offered by an influencer can track ROI and sales conversions.

However, Influencer Intelligence states that having the ability to calculate the ROI of influencer marketing investments is just half of the journey.

“How this intelligence is used and fed into future strategies is where it becomes something meaningful and worthwhile,” the Influencer Intelligence report states. “It is critical that brands have enough transparency and control over data to be able to see which influencers and channels are performing the best for them, over both the short and long term.”

What Consumers Want & What They BuyMonthly Economic Letter September 2021