The Clock is Ticking

Get Your Brand on This App

Remember when there was talk of banning TikTok here in the U.S.? Back then, in August of 2020, the app had 100 million active users in America. By June of this year, U.S. active users increased 30 percent to more than 130 million. Worldwide, the social platform has more than a billion users. That’s why — especially when considering the popularity of this addictive app among young consumers — marketers say the time is now for fashion brands to hop on it.

"TikTok changed the notion that an influencer is a celebrity or somebody that you'd see on another platform. Creators are engaging in environments and creating joyful content that is relatable and authentic, and that's what separates TikTok from other platforms."

Statista says TikTok has become one of the most downloaded non-gaming apps in the world, achieving about 205 million downloads in the second quarter of 2021. As of July, Statista reported Charli d’Amelio, with 122.5 million followers currently, was the most-followed content creator worldwide. She joined the platform in May 2019 and became known for her dance videos. Now 17 years old, she and her family will star in “The D’Amelio Show” on Hulu beginning September 3.

Meanwhile, 24-year-old Bella Poarch began posting on TikTok in April of 2020 after having served a 4-year stint in the U.S. Navy. A mere handful of months later, a video of her lip syncing Millie B’s M to the B went viral and it became the most liked video on TikTok in 2020. Now, with nearly 79 million followers, she’s the platform’s fourth most popular content creator — and a singer in her own right after having signed a deal with Warner Records in May.

In a webinar with Launchmetrics’ chief marketing officer Alison Bringé, TikTok’s Kristina Karassoulis, head of luxury brand partnerships, said it’s possible for anyone to become wildly popular on the platform because its algorithm is tailored to each user’s interest.

“Everything you do and the way you use it is curated exactly for you, which is why it’s so addictive,” Karassoulis said. “At the same time, it also means that a brand or a creator can become an influencer. Anyone can go viral from one video they post, if the content is good enough. Which means, TikTok changed the notion that an influencer is a celebrity or somebody that you’d see on another platform. Creators are engaging in environments and creating joyful content that is relatable and authentic, and that’s what separates TikTok from other platforms.”

Cotton Incorporated launched its TikTok page (DiscoverCotton) in May. Content includes a humorous animated video that reminds users their denim jeans are in the back of the closet, patiently waiting to be worn “if you want to feel like a real person.” Singer/songwriter Madilyn Bailey is also featured in a number of videos. She asked TikTok fans to share some of their favorite cotton items with her, and then she wrote songs about them.

Connecting with consumers at a personal level has always been important but it may just be more valuable now more than ever. Consumers are presented with seemingly endless options of brands and shopping venues, whether it’s in-store, retail or brand websites, or through social media apps. However, 48 percent of shoppers say they’re more loyal to clothing brands that seem to “share my personal interests,” such as giving back to the community, health and fitness, cooking, art, music, etc., according to the 2019 Cotton Incorporated Lifestyle Monitor™ Survey. That sentiment increases significantly among Millennials (56 percent), as well as with Gen Z (51 percent). 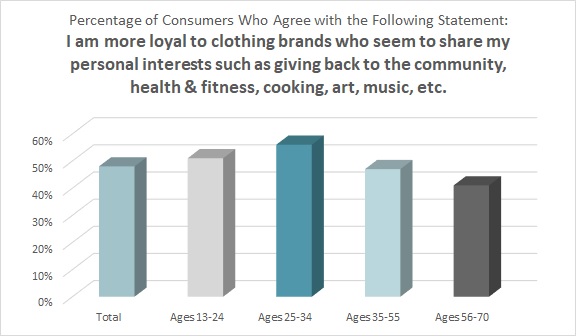 YPulse described TikTok as “an unstoppable force in the world of social apps.” Its Social Media Deep Dive trend report found 58 percent of those aged 13-to-19 use the app, which is significantly more than those aged 20-to-39 (39 percent). YPulse adds that adoption among the younger set has been faster, increasing 46 points between January 2019 and April 2021. That compares to a 36-point increase among their older counterparts.

“However, growth among Gen Z appeared to be slowing down, or plateauing slightly, between February and April of this year,” YPulse states. “If Millennial growth continues, they could catch up to Gen Z this year. But right now the app remains a distinctly Gen Z domain.”

Emarketer reported that in 2021, TikTok will have reached more Gen Z users than Instagram (37.3 million versus 33.3 million, respectively).

When it comes to the likelihood of purchasing a product directly from a social media post, the 2020 Monitor™ data find 41 percent of Millennials and 39 percent of Gen Z say they would be likely to do so. That compares with 26 percent of Gen X and 10 percent of Boomers.

As for apparel advertisements on social media, Gen Z (63 percent) and Millennials (58 percent) found them “very or somewhat” helpful, according to the Monitor™ research. Those figures drop to 47 percent of Gen X and 38 percent of Boomers.

Launchmetrics’s Bringé said 43 percent of marketers say they’ve launched creator campaigns on TikTok, but 33 percent said they did not — due to a lack of proper tools to identify and manage creator relationships. Bringé said this hesitancy speaks to brands thinking there is a secret to becoming successful on TikTok. However, she pointed out that Karassoulis’ team helps to onboard brands and connect them with the right resources and creators to generate engaging content for users.

“What’s great about TikTok is anyone or any piece of content can go viral,” Bringé said. “So if you guys think content first, and then think about creators and content that really marry well together, it’s a huge opportunity for your brand to tell that story and reach many people. To be successful, it’s less about being the coolest kid on the block. It’s about putting out great content — and TikTok will get that great content to great people.”

Men and Women Who Shop for Clothing on Sale

The Next Retail Model: Getting With the Streaming Program

Dressing for the Seasons