Millennials and Gen Z use technology at lightning speed, endlessly cruising from video to messaging to news to email with tireless dexterity and engagement. Older generations, meanwhile, are quick to say they don’t understand how certain apps or sites work and accuse young people of being glued to their phones. But when it comes to clothes shopping, retailers may want to reassess how they’re appealing to the different generations for online versus in-store sales.[quote]

A global survey from Oracle NetSuite, Wakefield Research, and The Retail Doctor took a look at the varying shopper expectations of different generations and the role technology plays in providing personalized experiences for consumers. It found that “digital natives” actually value brick-and-mortar stores more than their parents or grandparents. But that also doesn’t mean Boomers aren’t shopping.

While the majority of consumers (71 percent) still prefer to purchase apparel in a physical store, according to the Cotton Incorporated Lifestyle Monitor™ Survey, Gen Z likes to do so mostly for the experience of trying on clothes (83 percent). Gen Xers (79 percent) share this appreciation. 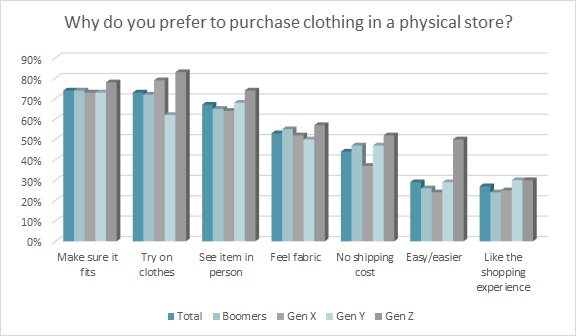 “In the age of online convenience and quick shipping, one thing that continues to be important for consumers is the ability to have their products quickly,” Zakowicz says. “This immediacy is a primary reason that services like buy online, pickup in-store (BOPIS) are increasingly being offered by retailers.”

Among Gen Z shoppers who prefer to buy clothes online, most (75 percent) say they like it because it’s easier than going in-store (75 percent), and they can avoid crowds and find a better selection (70 percent), according to Monitor™ research.

On the other hand, Zakowicz says older generations appreciate the convenience of shopping online and receiving quick delivery.

“As stores try to cater to the younger generational cohorts, they often shift away from the experiences older generations are used to,” he explains. “As retailers target their product selection toward younger shoppers, they run the risk of limiting the products Boomers want. Shopping online provides Boomers and Gen X with a larger selection of products to choose from, which appeals to them.”

The Monitor™ research finds that Boomers and Gen X shoppers who prefer to shop online mostly enjoy the convenience of it (68 percent).

At first glance, it may seem surprising that older shoppers would be quick to adopt online shopping behaviors. But consider that Boomers are now 55-to-75 years old. For those on the upper end of the spectrum especially, a few simple clicks from the comfort of the couch might seem more enticing than traversing a busy parking lot or city streets, only to wander the long aisles of a mass retailer or the many levels of a mall. In the survey from Oracle NetSuite, Wakefield, and The Retail Doctor, Gen Z and Millennials (57 percent) had the most positive view of the current retail environment, feeling it was more inviting. That was followed by 40 percent of Gen X shoppers. Just 13 percent of Baby Boomers view the retail experience positively.

“Retailers aim to ‘future-proof’ themselves by meeting the expectations of younger consumers,” Zakowicz says. “Knowing that Boomers are doing more shopping online means retailers can transform without drastically alienating their older customers while still catering to younger shoppers. Considering the current spending power of Baby Boomers and the future power of the youngest generation, it seems like the perfect mix for brands.”

As upbeat as that sounds, one area where retailers need to temper expectations is in AI (augmented intelligence) and VR (virtual reality), according to the NetSuite, Wakefield Research, and Retail Doctor report.

“Retail executives look at [the younger generation] and the pervasiveness of technology, and assume that’s what consumers want,” Zakowicz says. “With the news in recent years about virtual dressing rooms and the use of augmented reality in apps and on e-commerce websites, they’re seeing the potential use cases for this technology and don’t want to be left behind. The impact of this tech can hold promise for the future but comes with a balance of understanding the ways in which shoppers prefer to engage with it.”

Instead of things like chatbots or virtual dressing rooms, most consumers (66 percent) think retailers should focus more on improving customer service both in stores and online, according to the Monitor™ research. Another 46 percent would also like if apparel brands and retailers used information from their purchase history to personalize their shopping experience and give recommendations on what to buy. Among shoppers under the age of 35, 53 percent want a more personalized experience, versus 42 percent of those who are over the age of 35.

Almost half of all consumers (46 percent) also wish brands and retailers knew more about what they like and how they shop, according to the Monitor™. Again, the number breaks higher for Millennials and Gen X shoppers (57 percent) versus their older counterparts (48 percent).

The NetSuite, Wakefield Research, and Retail Doctor report also found that half of all retailers admit they have not made progress in tailoring their in-store experience to cater to different generations. For instance, in the report, 56 percent of Millennials, 44 percent of Gen X, and 43 percent of Boomers all said they would feel more welcomed by extra in-store interactions. But Gen Z valued store associate interaction the least, with 42 percent saying they would “feel more annoyed” from increased dealings.

Zakowicz says so many retailers haven’t made progress on this front because stores have traditionally struggled to let go of “what has always been.”

“There is a natural and warranted fear of being the first to try something new and fail. It can also be challenging to understand the needs and wants of consumers when shopper expectations are consistently changing,” he explains. “At the end of the day, retailers are making strides to improve the overall convenience of the shopping experience, which should appeal to shoppers of all generations. Does this mean that stores won’t leverage — or customers won’t want — technology or new store layouts? No. But the end focus will likely be on meeting customer expectations. And right now this tends to center on making it as easy as possible for customers to do business with brands – whether that’s with easy checkout and returns, BOPIS or friendlier layouts.”

Here's Why "Made in USA" MattersConnecting With the Hispanic Market