Working in the Time of Corona

A Los Angeles Times fashion editor recently caused a kerfuffle when he wrote that people working from home should “dress like the professionals you’re getting paid to be.” While no one working in fashion is surprised a fashion editor would take time out during a global pandemic to judge other people’s clothes, it did seem to cross a line when he gave Anna Wintour the business for wearing sweatpants on Vogue’s Instagram feed. He even threw shade at CNN’s Chris Cuomo — who was working despite having the coronavirus — for wearing a casual shirt and not the usual anchorman garb.

"Many people will return to a fundamentally different work environment -- one in which telecommuting, flexible hours and an emphasis on work-life balance are new norms...Comfort could become a top consideration in apparel purchases. The trend toward 'casualization,' which was already strong prior to the crisis, could further accelerate."

-McKinsey & Company,
Perspectives for North America's Fashion Industry in a Time of Crisis

Unsurprisingly, the internet response wasn’t exactly warm. Unless one considers a roasting warm. That’s because along with turning to comfort food and snacks like mac and cheese, Oreos, ice cream, and Cinnamon Toast Crunch (shout out to those who’ve sampled them all in one night), consumers are easing their stress with comfortable clothes.

Edited’s Kayla Marci reports activewear sell-throughs increased 40 percent in the U.S. in early April. Men’s activewear for Q1 2020 increased 18 percent while women’s grew 43 percent over 2019. Leggings made up 50 percent of all bottoms, with plain styles winning out over prints. If consumers did buy a pattern, it was predominantly in color-block, floral, or tie-dye styles. Additionally, the firm told the Wall Street Journal that the number of sell-throughs in tracksuits increased 36 percent, while sweatpants sell-outs increased 39 percent. Another hot seller? Bathrobes, which saw a 29 percent sell-through increase.

Despite the consternation of the L.A. Times’ critic, it makes sense that sales of these items have increased at such a rate. By the third week of April, with all but five states employing statewide or partial directives to flatten the curve, hundreds of millions of U.S. citizens were put under stay-at-home orders. Uncertainty and stress paired with the fact that people had nothing to dress up for led to near immediate changes in daily attire.

Rather than dressing and commuting to work, holding presentations and meetings or going out for dinner with friends, people have downshifted to very different conduct, according to the Cotton Incorporated’s 2020 Coronavirus Response Survey (Wave 1; March 20-25). More than 7 in 10 (71 percent) are watching more TV, movies, and videos; 67 percent are reading/watching/listening more to the news; 62 percent are wearing comfortable clothes more often; 54 percent are cooking more, 52 percent are eating more comfort foods and snacks and 40 percent are playing video games more than usual. 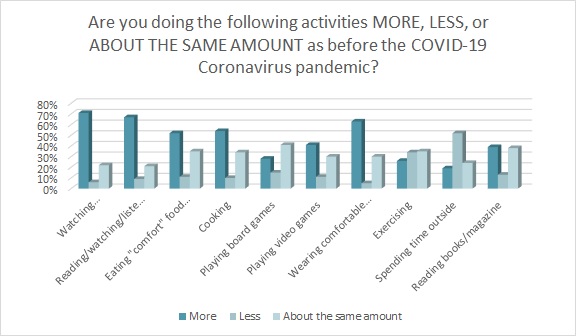 Since quarantining began, for those shopping for apparel almost half (46 percent) say they have purchased clothes that are made for comfort, according to the Coronavirus Response research. And 51 percent of respondents said comfortable clothes are more important to them since the pandemic took hold. To that end, over a third (37 percent) purchased clothes made of natural fibers. And 34 percent say they’re wearing more casual clothes than they did before.

Amidst all the volatility, consumers seem to be looking for more stability from their apparel, with 42 percent saying they’ve purchased clothes “that will last” and are durable, according to the Coronavirus Response survey. Another 40 percent said they purchased activewear/athletic clothes, while 27 percent say they’re wearing active clothes more than they did prior to the quarantine effort.

The increased sales of items like soft sweats and versatile yoga pants, whether for watching TV or working out, speak to the consumer’s effort to self-soothe during an unprecedented crisis. Despite endless feel-good videos from celebrities — yes, January Jones, we saw you in your sweatpants and tee, dancing in your living room while using a paper straw to sip a beer through your fancy light therapy mask (no lie) – and funny memes and TikTok videos, the coronavirus has taken its toll on the country’s psyche, according to WGSN, the trend forecasting company. Of course, Americans didn’t really need any more of a push in that direction. In 2017, WGSN determined in its Future Drivers 2022 and Future Consumer 2022 reports that “anxiety has become a key cultural and generational concern, with fear now becoming the emergent emotional state.” And that was years before the pandemic.

“Current events are accelerating this mindset shift, with consumer fear — and the responses to it — colouring [sic] actions both during and after the coronavirus pandemic,” WGSN states in its report, Coronavirus: Global Change Accelerators. “Consumers will not only be fearful on the wellness front, worrying about their health, but concerns around finances will also come to the fore in the midst of the financial uncertainty that has emerged as businesses are forced to shutter or slow down operations.”

Fully 63 percent of Americans say they “feel very afraid these days,” either somewhat (38 percent) or strongly (25 percent), according to the Coronavirus Response research. Three-quarters (75 percent) say they “just want to curl up in a cozy bed/blanket right now.” And 70 percent somewhat/strongly agreed that “people are not taking this pandemic seriously enough.” To get away from it all, more than half (54 percent) say online shopping is a way to escape.

WGSN says that as people move into “survival mode,” they will gravitate toward products that “reflect a sense of safety and security.”

That explains why three-fourths of consumers (75 percent) say “wearing comfortable clothes helps me feel better right now,” according to the Coronavirus Response research.

Additionally, most people rate cotton to be significantly safer than other fibers, according to the Coronavirus Response research. The overwhelming majority of consumers rated cotton the safest clothing fiber, with over 4 in 5 consumers (82%) rating cotton clothing as safe, far more than other major fibers like polyester and rayon.

Looking forward, brands and retailers might consider the importance of consumer desire for comfort and safety in their apparel. McKinsey & Company says in its article Perspectives for North America’s Fashion Industry in a Time of Crisis, that the “next normal” might see people looking casual all the time.

“Many people will return to a fundamentally different work environment — one in which telecommuting, flexible hours and an emphasis on work-life balance are new norms,” McKinsey states. “Comfort could become a top consideration in apparel purchases. The trend toward ‘casualization,’ which was already strong prior to the crisis, could further accelerate.”

Battle of the Bottoms