The Evolution of Denim

Out of economic crisis comes change. But that doesn’t mean that people abandon the things that are familiar and provide comfort. It just means these things tend to evolve. The history of denim jeans stands as a testament to this.

"About three-quarters of women's jeans that were sold this past year were under $25, with 19 percent being between $25-and-$50. When we looked at men's jeans, we saw more units were sold at a higher price: 63 percent were sold under $25, and about a third of men's jeans were sold between that $25-to-$50 price range."

Blue jeans were born the same year the United States experienced its first “Great Depression.” (Who knew there was more than one?) And 10 years ago, when the country was recovering from the Great Recession, denim was going through one of its many evolutions, as “jeggings” were taking retail by storm. Sure, at the time they were called a fashion “low” by the Wall Street Journal. But they’re still around, still popular and they even count as runway fashion.

The blue jean celebrates its “birthday” on May 20. The first pair was officially patented in 1873. The event was decades in the making. In 1853, Levi Strauss left New York and headed to the Gold Rush town of San Francisco to sell dry goods to the general stores. Jacob Davis was a tailor and a regular customer of Strauss’. One day he wrote to Strauss, telling him how he made his pants stronger by using rivets at the stress points of the pockets and the base of the button fly. He wanted to patent the pants but didn’t have the money for the official paperwork, so he pitched an idea to Strauss: if he paid the fee, they could own the patent together. On May 20, 1873, they were granted the patent for “Improvement in Fastening Pocket-Openings.” It was the addition of the rivets that transformed the denim bottoms into blue jeans.

During this same period, the American railroad was being established, in part to improve travel for those heading toward the California Gold Rush. But in September 1873, just months after Strauss and Davis received their patent, the bottom fell out of the economy. A firm that had financed the railroad construction, Jay Cooke and Company, became overextended and declared bankruptcy. It set off a domino effect and within two years, 18,000 businesses failed and unemployment rose to 14 percent. Lasting until about 1879, the period was referred to as the Great Depression — until the stock market crashed in 1929.

Since then, designers have adapted the blue jean from being purely  rugged workwear to a wardrobe classic, while keeping consumers’ preferences in mind.

In 2010, denim customers purchased new jeans because they needed them (45 percent), and also because they liked jeans (17 percent), found them comfortable (16 percent) and liked the new styles or brands (11 percent), according to the 2020 Cotton Incorporated Lifestyle Monitor™  Survey. In 2020, 46 percent continue to buy new jeans to replace the old pairs, while 28 percent buy to both replace their denim and add new styles, and another 26 percent just like to add new jeans to their collections.

Features that were important to denim consumers a decade ago still resonate, according to Monitor™ respondents. In 2010, 96 percent of consumers said fit was an important factor in their denim jean purchases, followed by comfort (95 percent), quality (91 percent), “makes me look good” (90 percent), durability (88 percent), and price (86 percent).

Ten years later, the numbers are similar regarding fit (97 percent) and comfort (96 percent), but Monitor™ respondents now place significantly more emphasis on quality (94 percent), durability (93 percent) and, price (93 percent). At the same time, more people today are interested in performance features like water- and fade-resistance than they used to be (65 percent versus 58 percent), as well as environmental friendliness (49 percent versus 43 percent). 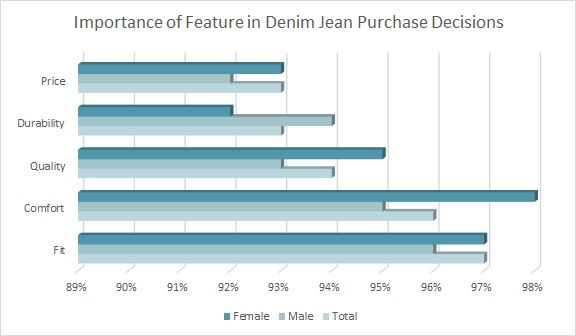 In an online April presentation from the Kingpins Denim Show, the NPD Group’s Kristen Classi-Zummo, industry analyst, said women buy jeans more often than men but they don’t spend as much per pair. Women’s bought jeans just over two times per year, while men purchased them about one-to-two times per year.

“We looked at our actual sales data from our retail partners, which includes mass, department stores, national chains and some online retailers,” she said. “About three-quarters of women’s jeans that were sold this past year were under $25, with 19 percent being between $25-and-$50. When we looked at men’s jeans, we saw more units were sold at a higher price: 63 percent were sold under $25, and about a third of men’s jeans were sold between that $25-to-$50 price range. And now looking at even higher price points, 5 percent of men’s jeans were bought between $50 and $75, compared to only 3 percent of women’s jeans. Now that really showcases the opportunity for higher price points within the men’s jeans market.”

Classi-Zummo also said stretch or flex has been growing in the women’s market for years, and could be found in 88 percent of women’s jeans sold in the past year.

“Where the opportunity lies is in men’s jeans,” she said. “When we look at growth in men’s jeans, we see jeans with some sort of stretch properties grew 40 percent this past year. And when we look at unit sales, stretch was only included in 20 percent of units sold. So we see it’s included in the minority of sales, but it’s growing double digits.”

Meanwhile, she said, women are looking for more than just stretch in their jeans. They want special features like slimming, lift, and moisture wicking.

“Unit sales of women jeans with these special features has doubled in the past three years,” said Classi-Zummo. “And we know that women are looking to their jeans to not only make them look great, but make them feel great while living their busy lives.”

A Tale of Two Generations

How Gen Z is Redefining Influencers

From Indie to Major Labels