If you ever wondered why you don’t see this colleague or that friend on your Instagram feed, it might be because almost every other post is an ad. At least it seems that way. Twitter is also loaded with promoted posts, and your Facebook feed is filled with notices that tout so-and-so liked something or other (their soft advertising entrée). Whether users like them or not, those ads are having meaningful results for brands.[quote]

Marketers spent more than $89 billion on social media ads in 2019, a figure that’s expected to increase 8.7 percent to reach $102 billion this year, according to Sprout Social, a social media management and optimization platform. The bulk of that, about $74 billion, is expected to be generated via mobile advertising, while the remaining $27 billion is projected to come from desktop ads, according to Statista.

Martin says the factor that will keep marketers on the various platforms is this: “More than half of those respondents who primarily receive advertisements from brands on social media have made a purchase from a brand after seeing an ad on social media.”

Social media already has a good relationship with fashion consumers. Consider that nearly half of those ages 25-to-34 (46 percent) say social media sites are the first places they go to get apparel ideas, according to the Cotton Incorporated Lifestyle Monitor™ Survey. Among younger consumers age 13-to-24, more than one-third (36 percent) use social first. 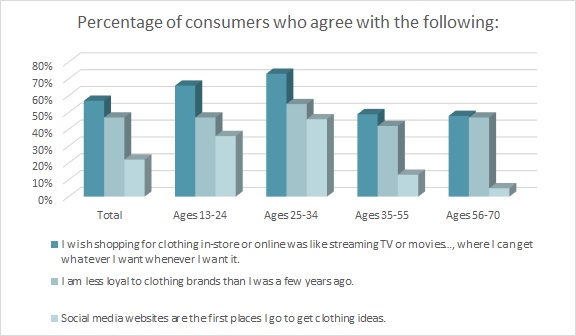 Social media sites like Facebook, Instagram, Pinterest, and Twitter are also popular among moms and dads, with 43 percent of parents of a one-year-old, and 34 percent of those with kids 2-to-5 years old finding inspiration from the platforms, according to Cotton Council International (CCI) and Cotton Incorporated Childrenswear Study.

This year, spending on social media is forecast to grow to 13 percent of marketing budgets, and is expected to rise to 21.5 percent by 2025, according to the February 2020 CMO Survey.

“Mobile marketing spending is expected to increase 73 percent in the next 5 years,” says Duke University’s Christin Moorman, senior professor of business administration for Duke and the founder of the CMO Survey. “Marketers cite social ads and user experience as the highest categories of mobile spend. They say the difficulty to track users across their mobile journey as the factor that is most limiting their success in this area of marketing strategy.”

Interestingly, the CMO Survey found social media alone — without the paid ads — contributes only “moderate value” to a company performance, 3.4 on a 7-point scale, where 7 equals “very highly” and 1 equals “not at all.” The survey says this figure has been flat since 2016.

“One explanation may lie in an increased ability to demonstrate social media impact on company performance, with 30 percent of marketers now reporting the ability to prove the impact quantitatively, up from 18 percent in 2017,” Moorman states.

Among the social platforms, Facebook remains the premier player. The Sprout Social 2019 Index found 89 percent of marketers use Facebook in their brand marketing efforts, and 83 percent of consumers use the platform. Statista says Facebook has nearly 2.5 billion active monthly users. And with video becoming a vital ad tool for social marketers, Sprout Social says 42 percent have developed strategies for Facebook Live.

Fashion brands trying to decide where to spend their money should know younger consumers are most likely to turn to Instagram for apparel ideas. The Monitor™ finds 70 percent of Gen Z and 60 percent of Millennials turn to the site the most. That’s followed by 33 percent of Gen X and 7 percent of Boomers.

Pinterest is also very influential among young shoppers, with 39 percent of Millennials and 38 percent of Gen Z turning to it for inspiration, according to the Monitor™ survey. It also gets a lot of traction among Gen X (29 percent), followed by Boomers (16 percent).

Facebook provides clothing inspiration for 50 percent of Millennials and 44 percent of Gen X, according to the Monitor™. But the site is used far less by Gen Z (12 percent) and Boomers (17 percent).

Twitter doesn’t hold the fashion appeal of other sites, as it generates the least amount of traffic among those seeking style inspiration. The Monitor™ finds just 16 percent of consumers overall turn to the site. It should be pointed out though, that it generates the most fashion interest among Millennials (22 percent), followed by Gen Z (17 percent), Gen X (16 percent), and Boomers (2 percent).

A healthy percentage of Gen Z shoppers also turn to Snapchat (31 percent) for clothing ideas, according to the Monitor™ research.

“Social media platforms are really stratifying by demographic,” said Mark Schaefer, social media consultant and author of “Marketing Rebellion,” in a Facebook interview with Social Media Examiner. He pointed to the video game FortNite and the newer social platform TikTok as further competitors for consumers’ attention — and advertising dollars. “That’s going to have profound implications for marketers. We can’t just be locked into these things that we’re comfortable with because the world is changing a lot — and it’s going to change a lot more in the next few years.”

Here's How Not to Fumble the ReturnHelping the World's Water