Some pretty momentous events happened 50 years ago: the U.S. voting age was lowered from 21 to 18; Paul McCartney announced the Beatles were disbanding; and Cotton Incorporated was formed in response to an increased use of synthetic fibers for apparel.

Funded by enterprising growers of upland cotton, cotton importers, and cotton-product makers, Cotton Incorporated was formed to promote the use of cotton and build markets for it. The funds from America’s cotton producers continue to go toward the not-for-profit’s research into decreasing farming costs and improving sustainable practices, developing textile innovations and promoting cotton goods.

"After half a century, consumers remain dedicated to their favorite natural fiber. And the Seal of Cotton assures them that all of Cotton Incorporated's research, development, and innovation remain just as unwavering. "

Back in 1970, cotton was the first commodity to be marketed directly to the consumer. And the marketing was helped along a few years later with the introduction of the Seal of Cotton, a registered trademark of Cotton Incorporated that features the familiar cotton boll. The iconic logo, designed by San Francisco-based creative agency Landor Associates, was born in 1973 to give consumers a visual reference to quickly identify cotton products. There are no fees or royalties involved in licensing the seal. The company just requires the use of cotton.

Cotton Incorporated introduced the Seal after cotton’s share of the textile market had dropped from 78 percent in 1960 to 34 percent. By the end of 1973, 18 percent of American consumers were able to identify the Seal. By 2003, the number had risen to more than 80 percent. Today, 91 percent of consumers are familiar with the trademark, and around 90 percent associate it with soft, comfortable, natural quality cotton products, according to the Cotton Incorporated Lifestyle Monitor™ Survey.

Consumer attraction to the Seal has been shown to increase sales for retailers that have collaborated with Cotton Incorporated in recent years. On average, some retailers have reported an average sales lift of +46 percent during the duration of the programs, which have included curated collections online and in-person shopping experiences.

This positive association with the Seal can benefit apparel brands that use it in their own packaging, marketing, window displays, and digital communications. More than 3 in 4 consumers (79 percent) say cotton is their favorite fiber to wear, according to Monitor™ research. And 72 percent say, “If I could spend my whole life in one fiber, it would be cotton.” That figure increases to 76 percent among Gen X shoppers. 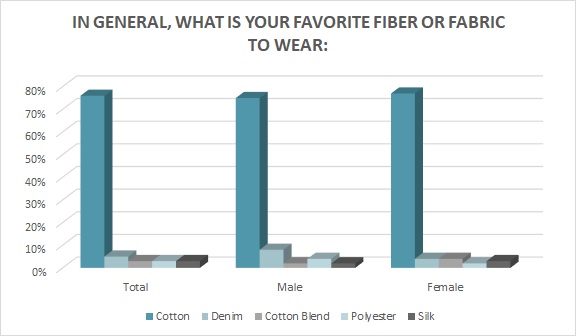 This positive association with cotton can also foster loyalty at a time when nearly half of all consumers (47 percent) say they are less loyal to apparel brands than they were just a few years ago, according to Monitor™ data. This dissatisfaction coincides with an increased use in man-made fabrics. More than 60 percent of all textile fibers are made of synthetics. The U.S. import of synthetics surpassed cotton garments just five years ago. These synthetic clothes — made from fibers like polyester, nylon, and acrylic — are petroleum-based. In fact, 70 million barrels of oil are used every year to make new polyester clothes, according to the Ellen MacArthur Foundation. But unlike natural fibers, they don’t degrade. At least, not for a couple of hundred years.

Now think about the fact that the Environmental Protection Agency (EPA) says the main source of textiles in our landfills is discarded clothing. In 2017, the EPA estimated nearly 13 million tons of clothes and footwear were generated. Of that, 1.7 million tons were recycled. Contrast that with 1960, when Americans generated 1.3 million tons of apparel waste, and 50,000 tons were recycled. Thanks to fast fashion, textiles in American landfills saw a sharp 84 percent increase between 2000 and 2015, according to the EPA. When using synthetics, brands should keep in mind fossil-based apparel also is energy intensive to produce and sheds microplastic pollution into the oceans and waterways, according to the Pulse of the Fashion Industry report, published by the Global Fashion Agenda and the Boston Consulting Group. The report says “substituting polyester with its recyclable counterpart (cotton) offers up to a 90 percent reduction of toxic substances, a 60 percent reduction of energy usage and up to 40 percent of reduced emissions.”

Unfortunately for cotton, misperceptions exist in the design community about its environmental footprint. Consider that today’s designers will proudly cop to using “recycled plastic bottles” — or polyester — which emits between 600,000 and 17.7 million microplastic particles into the wastewater of every laundry load, according to the Plastic Soup Foundation, an environmental non-profit against plastic pollution. Because these synthetics are essentially plastic, they don’t degrade and instead are building up in oceans, rivers, drinking water and the food supply. It is equivalent to dumping more than 50 billion plastic bottles into the ocean every year, according to the Ellen MacArthur Foundation.

Cotton garments also shed fibers during laundering. But a study from North Carolina State University, Cotton Incorporated and the Cotton Research and Development Corporation in Australia found cotton has a 76 percent degradation rate in water, compared to 4 percent for polyester. That means cotton degrades 95 percent more than polyester in wastewater. Further, it will continue to degrade over time, unlike polyester whose degradation plateaued after the time tested.

The same designers who employ polyester — recycled or otherwise — cite outdated water usage information as their reason for avoiding cotton. But the fact is, the cotton plant is very drought tolerant, and global production uses just three percent of the world’s agricultural water, according to a water resource study by A.Y. Hoekstra and A.K. Chapagain. That compares to 21 percent for rice, 12 percent for wheat, and 9 percent for corn.

Cotton has actually seen a 75 percent decline in irrigation use, according to a Field to Market survey from the Alliance for Sustainable Agriculture. And this is thanks to Cotton Incorporated’s research and commitment to sustainable practices. The company works with growers on precision agricultural techniques that deliver water only when and where it is needed. Nearly two-thirds (64 percent) of U.S. cotton is grown with naturally occurring rainfall.

Detractors also cite incorrect and outdated chemical usage by farmers. But, insecticide applications have been reduced by half in the United States, as measured by the Environmental Impact Quotient. As a point of comparison, almonds are sprayed with 34 kg of insecticides per hectare, while cotton receives 2 kg/ha, according to a study by Ashley E. Larsen and Frederik Noack, published in the Proceedings of the National Academy of Sciences USA. This reduction in chemical usage is due to Cotton Incorporated’s contributions to the development of Bt cotton, where the bacterium known as Bacillus thuringiensis (Bt) was successfully incorporated into the DNA of the cotton plant. Bt cotton has also improved lint yield and lowered costs to growers.

After half a century, consumers remain dedicated to their favorite natural fiber. And the Seal of Cotton assures them that all of Cotton Incorporated’s research, development, and innovation remain just as unwavering.

The Comfort of Cotton