The holidays are one of the biggest spending periods of the year. But considering COVID19 may have families and friends mulling how or if they will celebrate together this year, it’s no wonder the words “different” and “uncertainty” crop up with every holiday forecast. That’s why it may be surprising that industry experts are upbeat heading into the season.

Kantar Retail expects 5 percent growth over 2019, which is a percentage point more than a year ago. The firm also expects online spending to increase 30 percent, almost double the growth seen last holiday.

“Before you say that seems a bit too strong, we have to consider less spending on holiday travel and restaurants is going to shift some spending to retail,” said Kantar’s Doug Hermanson, principal economist, in a recent webinar.

The NPD Group’s Marshal Cohen, chief industry advisor, is more tempered, stating, “The 2020 holiday retail season may be shaping up to be quite different in the U.S., and most certainly interesting, but it won’t be a bust.”

On average, holiday shoppers plan to spend about $725 on holiday gifts this year, down 5 percent compared to the $758 consumers planned to spend last year, according to the Cotton Incorporated Lifestyle MonitorTM Survey. Shoppers plan to spend $385 on electronics (down significantly from $435 in 2019), $283 on apparel gifts (flat compared to last year), $248 on experiences such as vacation or activities (down significantly from $391 last year), $224 on home textiles (up from $205) and $175 on gift cards (notably down from $212). 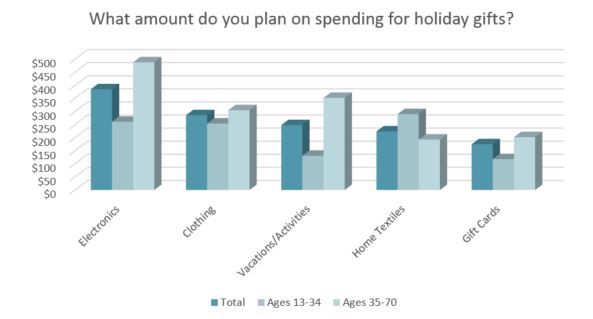 Kohl’s CEO Michelle Gass says this holiday season “will be like no other, as this whole year has been like no other.” She spoke to Matthew Shay, CEO of the National Retail Federation (NRF) in a recent webinar.

“I can’t help but be really excited about the holiday season,” Gass said. “I expect customers will want to start shopping a little early. And I think that’s both certainty driven as well as safety driven. With all the change that’s happened during this COVID period, if you really want a particular gift that you’re seeking for someone, you want that security that you’re going to be able to get it. We can all recall some of the outages that happened at the grocery stores. So we’re going to be prepared for that and we have some new campaigns and new ways to connect with the customer as early as October, because we think it will start as soon as that.”

In recent years, a growing number of consumers said they shopped for holiday gifts year-round, owing to the enormous savings Amazon’s Prime members could snag during July’s Prime Day. The company counted 112 million Prime members as of last January. This year, Prime Day was delayed and will run Oct. 13-to-14.

Most (32 percent) plan to start their shopping in November, according to the MonitorTM, while just 7 percent will start in December. Another 12 percent are undecided on when they will start buying their gifts this year.

Among those who plan to buy holiday gifts online, 48 percent plan to shop during Cyber Monday and Black Friday (48 percent), according to MonitorTM data.

Continued consumer concern about the pandemic will play out as the holidays get closer. A September 2020 Coronavirus Consumer survey from the International Council of Shopping Centers showed nearly 3 out of 4 Americans are worried about a potential second wave of COVID-19 as the fall season approaches. And 72 percent say if there is a surge of COVID cases in their state, they would support another or a first-time lockdown.

Among shoppers who do not plan to shop in-store over the holidays, 65 percent say it’s because they feel it is safer to shop online during the pandemic, according to the Monitor research. That’s followed by 45 percent who just prefer to shop online.

Of course, not all consumers will be restricting themselves solely to ecommerce. More than 2 in 5 consumers (44 percent) plan to shop for their holiday gifts in physical stores, according to the MonitorTM research. And more than one-third (36 percent) haven’t yet decided if they plan to shop in brick and mortar stores. A significant 20 percent of holiday shoppers say they do not plan to purchase gifts in-store.

Retailers can help ease consumer worries about coming to store locations by increasing safety protocols. The majority of holiday shoppers say they would feel more comfortable shopping in-store if retailers required shopper to wear masks (61 percent), according to the MonitorTM survey. That’s followed by limiting the number of people allowed in the store at one time (52 percent), requiring spacing in check-out lines (52 percent) and providing hand sanitizer for customers (51 percent).

The pandemic isn’t the only thing that that will affect holiday sales. The economy is also a factor in how much consumers will spend — and what they’ll actually purchase. Kantar Retail pointed out that unemployment stands at 8.1 percent, which is an improvement from close to 15 percent several months ago, but, “we still have about 14 million people that are looking for work that can’t find it,” Hermanson said.

Nearly one-quarter of all holiday shoppers (24 percent) plan to spend less money this season due to the economic uncertainty brought on by COVID19, according to MonitorTM data. Another 26 percent expect to spend less because they have less money. And 22 percent plan to cut back in an effort to save money.

Hermanson pointed out that among those who still collected an income, the average savings rate in the U.S. was 24 percent from April to July — a record high.

“There is that pile of cash that can potentially be used this holiday,” Hermanson said. “We just don’t know if it will be used, how much it will be used. There are some that are going to be struggling. But there are others that have the higher income that typically use a lot of discretionary income toward things like travel. But this year they’re probably not going to do that. And so, they have savings that they might use on other big ticket items, particularly merchandise at retail.”

“When we look at what really resonated over the last few months, home was positive despite the stores being closed for part of that,” Gass said. “Casual and active attire — always an important category in the holiday season, is even more so now. So being that destination for all things comfort, fleece, cozy and ‘jammies for the family’ — we’re well set up to serve in that way.”

Zenreach, the walk-through marketing company, in an email to MonitorTM says in-store foot traffic has been hovering around 50 percent of its normal level for the past three months, up from a low point of 20 percent when COVID19 hit. To help retailers pivot and thrive this holiday shopping season, the company says it’s critical that brick and mortar stores not only employ safety precautions to alleviate consumer concerns, but let shoppers know about these actions. Additionally, with limited capacity allowed in stores, Zenreach says retailers should use data to identify, connect with and bring in their loyal, high-value customers. Finally, the combination of record-high online consumer engagement combined with lower internet advertising costs has meant “amazing performance numbers for retailers. In fact, we have seen campaigns with click-through rates as high as 2-to-3 percent, which is roughly 20-to-30 times higher than pre-COVID averages.”

Kohl’s took advantage of being an omnichannel player during the shutdown and intends to capitalize on the gains it made over that period. In the last quarter, Gass said 50 percent of their digital orders were fulfilled by stores locations. Curbside pickup also brought digital customers to stores locations. And this fall, Kohl’s is kicking off a partnership with Lands’ End. Product will be in 150 stores, as well as online. The chain is also introducing a new rewards strategy this holiday season to draw more consumers into its loyalty program. And it will continue with its Amazon Returns system, which attracts online customers to its stores.

“I think we just all have to put our best foot forward, stay close to the customer, and adjust and adapt,” Gass said. “Where do you see the customers going? Let’s let the customer lead. I think taking anything from COVID, it’s how to be flexible, and how to be fast and decisive. And I think those assets will serve us as we try to do make the most of the holiday season.”

COVID-19 and the U.S. Consumer (Wave III)How to Tell Your Brand's Story and Meaningfully Connect