Tech-savvy shoppers are increasingly making new discoveries through shopping sites or apps that hook them up with their favorite fashions.  But this field continues to grow, making it increasingly important to have a hook that helps an app stand out from the crowd.

[quote]”There’s a whole world of affiliate sites based on the idea of consolidating eyeballs and pushing people to websites where they buy,” says Forrester Research’s Sucharita Mulpuru, analyst.  “The challenge, though, is to merge content with commerce.  It’s really hard even with a known brand to build a following.  There’s too much noise in a crowded field.”

Nearly nine out of 10 consumers (87%) say they browse for clothes online using a traditional computer/laptop, followed by a mobile/smart phone (44%) and a tablet (34%), according to the Cotton Incorporated Lifestyle Monitor™ Survey.  Women are significantly more likely than men to browse for clothing online using a traditional computer/laptop (91% versus 81%) and a mobile/smart phone (47% versus 40%).

The new sites and apps act as middlemen, not actually selling apparel, but connecting consumers to items they want.  Take, for instance, TheFind.

Siva Kumar, CEO and co-founder, says TheFind focuses on three areas to attract consumers: it combines a mobile platform with personalized product selections based on the consumer’s social DNA, as well as cross-device shopping capabilities that let consumers browse on a tablet and then buy from their PC.

“Our goal is to provide the best online shopping experience for the tech-enabled consumer, one that they return to again and again,” Kumar says.  ” TheFind is designed to save consumers both time and money. Most consumers’ top priority is to save money, but we think time is of equal value. In this digital age of shopping, consumers expect to be effortlessly connected to the products and brands they love.”

For Trendabl, the social component is very important.  Here, the idea is to create an environment for people to share, discover and shop for fashion, says Jon Alagem, CEO and founder.

“To be able to have the most optimal discovery possible you need to have multiple merchants selling different items,” he explains.  “Therefore we knew it was important to build a marketplace for retailers and brands to sell directly via their social feed. When you’re a single retailer, you have a specific style of what that buyer chose to buy. But when you’re a marketplace, you have a pool of thousands of merchants selling all different types of merchandise, giving the consumer endless options.”

Alagem says as the shift to “everything mobile” grows, consumers will rely on having all of retail at their fingertips, including shopping and discovery.  Completing a purchase on Trendabl is done natively within three clicks, without having to leave the app. 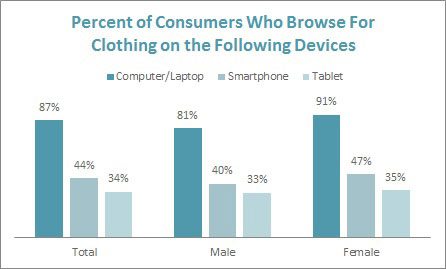 While shoppers are always looking at pricing, finding the best deal can be infuriatingly tedious.  Hukkster, which was co-founded by Erica Bell and Katie Finnegan, looks to alleviate that frustration by linking consumers with relevant retail sales and promotions that may otherwise go overlooked.

“The retail industry is ripe for change,” Bell says. “Retailers spend over $4 billion dollars annually on traditional digital marketing channels like email marketing, but so much of this goes overlooked by consumers who are inundated with emails and display ads online.  By capturing consumers’ intent to purchase in-season, Hukkster passes only relevant content back to consumers, creating a dialogue between the consumer and retailer that does not exist today.”

Finnegan says Hukkster can hone in on sales for products consumers have stipulated that they actually want.

“Consumers simply tag or ‘hukk’ the specific products they’re interested in and Hukkster will only alert them when those products go on sale,” she says.  “As a result, Hukkster sale notifications boast a 75% open rate over the industry average of 3%.”

Nearly seven out of 10 consumers (69%) shop for clothes online to compare prices at different retailers, up significantly from 63% in November 2010, the Monitor shows.

Mulpuru says it remains to be seen whether such affiliate sites will truly help retail’s bottom line.

“Some affiliates cannibalize traffic, and some shoppers abandon their carts to go looking for coupon codes,” she explains.  “But then there are fashion affiliates that can drive volume because fashion has that entertainment value, too.”