Consumers may still shop at their favorite apparel stores, but increasingly they are hitting the Internet first. Some prefer to research the store’s offerings, or ask friends for their opinion – and others simply purchase the item on their laptop, iPad or phone to save themselves a trip.

“E-commerce is really slaying the dragon,” he says.

Computers, smartphones and tablets have changed the way consumers buy their apparel.  Even if they do not always go in-store to make their purchase, shoppers are more engaged than ever with brands and retailers.

More than 8 of 10 consumers (85%) browse the Internet for apparel and 72% will buy online, according to the Cotton Incorporated Lifestyle Monitor™ Survey.   The younger shopper is even more drawn to e-commerce: those ages 13-to-34 are significantly more likely than consumers ages 35-to-70 to browse online (91% versus 80%).   Consequently, those under 35 also are more likely than older shoppers to actually buy online (79% versus  66%).

The ease that comes with shopping on an iPhone or Android is not lost on U.S. Shoppers.  comScore reports nearly 110 million Americans owned a smartphone device by April of this year, up 44% from 2011.  And whether online or on a device, the number of consumers browsing or buying online is expected to surpass 200 million by 2015, according to eMarketer.   Men, women and kids are all part of the e-retail generation.

“Men used to have a huge phobia that an outfit or an item didn’t work,” Cohen says.  “Now, they can go online and do ‘pre-search’ to know what they want to look like.  And they can easily get a second opinion by asking someone online — be it a friend or fashion guru.  They can even send a picture of what they’re thinking of buying, get approval and buy it.  It’s a piece of cake.” 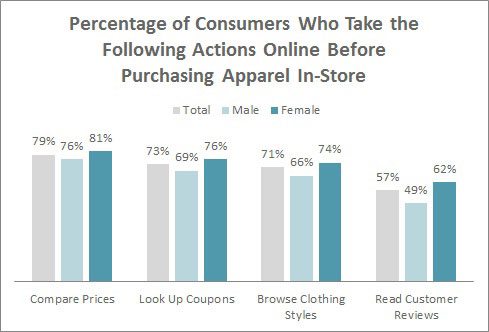 Although just 25% of shoppers write product reviews, 87% read reviews when shopping for apparel online and 57% do so even when shopping in-store, according to the Monitor.

Avid online and mobile users include tweens and teens.  The National Retail Federation’s Mike Gatti, spokesperson, says even though kids cannot make the e-purchase for themselves, they are using the Web to make apparel choices.

“The big retailers view online as a dual consumer relationship, so they’re building communities on their sites,” Gatti says.  “They build a site that is age appropriate for kids with games and product. And they also build it so parents can go in and see what their kids are interested in. And this helps build collaborations within the families.  Some of it is budget training for kids, because parents tell them they have a certain amount they can spend and the parents have to approve it before they buy.”

And, of course, price is a key factor for everyone when looking up a product before buying.  While shopping for clothes online, 81% of consumers look at the price in general to tell them about a product, followed by information on sizing (69%), color (63%), style (57%), discount coupons (50%) and shipping promotions (50%), Monitor data reveal.

“The intelligent consumer uses technology to price compare,” says BDO’s Stephen Wyss, partner in the retail and consumer products practice.  “And that makes it difficult for retailers to not have promo activity.”

Despite the growth in e- and m-commerce, consumers still have some concerns.  Nearly 9 of 10 shoppers (89%) are “very or somewhat concerned” about shipping costs.  Other concerns include not being able to try on the clothes (74%) and not being able to physically touch the clothes (60%), according to Monitor data.

“It’s changing retail in the face-to-face social side that we’ve all enjoyed so much,” Talamantes says.  “It’s being morphed by e-commerce trade.  That’s one of the big effects, that tangible connection with seeing a salesperson and touching the garments.

“E-commerce is a boon,” Talamantes says, “and this change in business is very interesting.”

Where do Chinese Consumers Shop for Clothing