Just when you thought you had a handle on what people meant when they talked about how the Internet of Things and artificial intelligence are crucial to the garment business, along came blockchain. It has just the right ring to make it sound confusing and highly technical. But understanding and employing it can mean a closer relationship to consumers.[quote]

“Blockchain is an open-source distributed ledger that can publicly record transactions between two parties in a verifiable, transparent and secure manner,” explains SAP’s Lori Mitchell-Keller, Global General Manager of Consumer Industries. “Its unique architecture allows individuals and organizations, including fashion retailers, to ensure all data — from payments to manufacturing and supply chain — is digitally recorded and not tampered with or deleted.”

In other words, according to William Mougayar, venture advisor, blockchain is like Google Docs™ web-based word-processing program in that both parties have access to the same document, and a single version of it is always visible to them.

Blockchain was originally created as a public ledger for bitcoin, the crypto-currency. But in the same way Botox® injections were originally used to treat eye spasms, blockchain may find wider use in a different application.

For those in the apparel industry, blockchain can mean more transparency when it comes to what apparel is made of, and where and how it is made. Daniel Newman, principal analyst and founding partner of Futurum Research, says blockchain can help lift the veil on the supply chain.

“In today’s global economy, we’re seeing companies all over the world partner for manufacturing, agriculture, pharma development and everything in between,” he writes in Forbes. “But as distance between these companies grows, so does the ability to ensure that the products and processes agreed upon are actually followed when the final product is made. As a buyer, we are well aware of this issue. Blockchain can help combat fraud by verifying the legitimacy of every part of the supply chain process, helping both the buyer and manufacturer.”

Being more transparent can also increase consumer loyalty, which would be a boon for any store or brand in today’s flighty marketplace. More than half of consumers (56 percent) say they’re less loyal to brands than they were just a few years ago, according to the Cotton Incorporated Lifestyle Monitor™ Survey. However, consumers admit they would be more likely to buy clothes from stores that offer things like clothes made from 100 percent cotton (81 percent) and clothes made in the USA (76 percent).

Another 57 percent say they would be more loyal to apparel brands and retailers that “took the time to educate me on their clothing products,” according to Monitor™ research.

Additionally, consumers are concerned with child labor (66 percent) and fair-trade operations (60 percent), according to the Cotton Council International (CCI) and Cotton Incorporated 2017 Global Environment Survey. Blockchain would make it easier to trace such practices.

In the apparel industry, blockchain would work as a public digital ledger where each item being manufactured would be given a unique product identity that is then stored in the blockchain. As an item makes its way through the production system, each transaction needed to manufacture that product is validated on a digital ledger that is continually updated for everyone in that network. Once information is entered, it can’t be changed. All participants have access to the same data at the same time, allowing them to seamlessly find information and answer questions.

“With blockchain technology, manufacturers have access to a living activity log so they can manage the flow of goods, identify and track problems to any point within the supply chain and streamline processes,” Mitchell-Keller says. “In addition, retailers who are purchasing apparel can benefit from the technology, particularly from the transparency, security and reliability it provides. Given that information on blockchain cannot be tampered with, retailers can ensure the items they sell are authentic and appropriately priced based on the products used and the overall manufacturing process.” 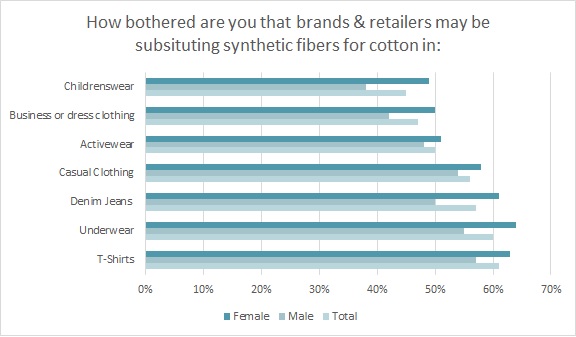 Blockchain technology would allow manufacturers and retailers to track and then promote natural fiber content to consumers. This is especially important, considering that consumers are willing to pay more to keep cotton from being substituted in their underwear (70 percent), T-shirts (65 percent), denim jeans (62 percent), casual clothes (60 percent), dress clothes (57 percent), and activewear (55 percent), according to Monitor™ research.

SAP’s Mitchell-Keller points out that retailers can develop an authenticity trail from point-of-origin to point-of-use, reassuring consumers, as well as everyone along the global supply chain, that the products are authentic, transactions are protected, and operations are efficient. In addition, she says, if there is an issue with a product, retailers can use blockchain to locate the affected batch and remove it from shelves faster than ever before.

“Blockchain’s revolutionary capabilities not only alleviate many points of friction in business transactions,” Mitchell-Keller says, “but they allow companies and individuals to easily exchange digital assets, positioning the technology for mass disruption.”