The holiday bills might be pouring in now, but U.S. consumers are likely not sweating paying them off. For the most part, consumer confidence continues to be strong, which bodes well for retailers as 2018 kicks off. However, certain outside factors could have an effect on the economic outlook in the longer term.

The International Monetary Fund (IMF) reported at the end of last year at its global meeting in Washington, D.C. that it expected the global economy to see growth increase 3.6 percent in 2017 and 3.7 percent in 2018.  Analysts at Charles Schwab expressed that a “better-than-expected 2017 appears to be morphing into a solid start to 2018.”

But Schwab experts added that while the bull market “still has room to run,” they expect a bumpier ride as the New Year progresses. So, too, does the IMF, which stated in its address that growth remains “too low” in Latin America, the Middle East and fuel-exporting areas of Sub-Saharan Africa. It added that factors like protectionism and political strife could negatively impact the global economic recovery. The IMF is also concerned that weak productivity growth, low inflation and aging populations are a threat to long-term prospects in many economies.

Maurice Obstfeld, IMF economic counselor and director, research, said the global acceleration is notable because it’s so broad based. He added that it offers opportunity that policy makers should take advantage of, as the economic recovery is incomplete and “the window for action that the current cyclical upswing offers will not be open forever.

This cautiousness can also be observed at the consumer level. Regarding the U.S. economy, less than half of all consumers (46 percent) say they are optimistic toward the outlook for the U.S. economy, according to the Cotton Incorporated Lifestyle MonitorTM Survey. However, that’s an increase from 42 percent last year. The Gen X segment is the most optimistic generation at 50 percent, higher than Boomers and Millennials (both 46 percent), and significantly higher than Gen Z (35 percent). 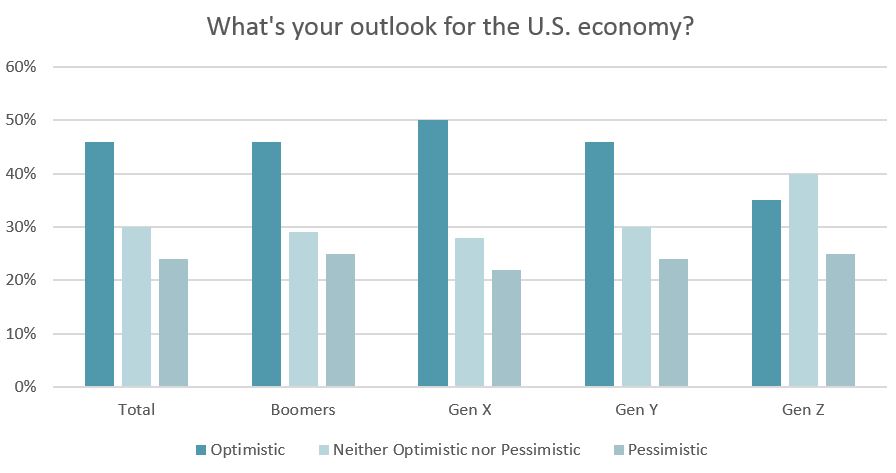 But as has been a pattern since the Great Recession, consumers feel better about their own personal financial situation than they do toward the country’s. More than half (55 percent) are optimistic about their own financial affairs, up from 52 percent last year, according to MonitorTM data. And at 61 percent, Millennials are significantly more optimistic than Boomers (47 percent), Gen Xers (56 percent) and Gen Z consumers (53 percent).

Additionally, men are significantly more likely to feel optimistic than females (59 percent versus 52 percent), according to Monitor data.

Key markers for the economy continued on an upward trajectory all year. Wall Street had plenty to cheer about in 2017, as the S&P 500 gained more than 19 percent year to date. Add to that an unemployment rate that stayed at 4.1 percent in November, the same as the previous month, according to the U.S. Bureau of Labor Statistics. For the year, the rate was down by 0.5 percentage point. These factors helped the Conference Board’s Consumer Confidence Index to increase to 129.5, up from 126.2 in October.

Things like housing starts or home sales could have an effect on that long-term outlook. Consider that while housing starts were up 13.7 percent in November, according to the Commerce Department, on a year-to-year basis they decreased 2.9 percent, due to labor shortages and expensive lumber.

Also, existing home sales were down in both September (-1.5 percent) and October (-0.9 percent), according to the National Association of Realtors. Meanwhile, the median home price has increased 5.5 percent to $247,000 nationally from October 2016. Experts point to low inventory and high demand as the reasons for decreased sales and increased selling prices.

However, Millennials aren’t buying homes like their parents did. Homeownership among those aged 25-to-34 is at a record low, according to the U.S. Census Bureau. Also, a survey by Modern Homebuyer shows that despite an interest in selling, 72 percent of homeowners say concerns with “timing the real estate market” are holding them back. Joe Melendez, CEO of ValueInsured, which provides down payment insurance for borrowers, told Mortgage Professional America magazine that a lot of homeowners are hesitant to sell because they’ve watched valuations fluctuate so much in the last decade.

“Homeowners in many cases are eager to sell but don’t want to become buyers,” Melendez said. “These homeowners have experienced a lot of home value volatility and see more uncertainties looming – tax reform, for example.”

In December, Trulia identified nearly a dozen major metro areas — including New York, Boston, San Francisco and Chicago — that could be negatively affected by losing property tax deductions that are capped at $10,000 by the GOP tax plan.

The end of 2017 also saw the Federal Reserve increase lending rates for the third time in the year by a quarter of a point from 1.25 percent to 1.5 percent. It was a sign that the U.S. economy is continuing to get healthier, with households spending more money. But it also raises the price of credit.

The tricky thing for apparel brands though, is that even though retail sales were strong, most consumers say they do their clothes shopping at mass merchants like Walmart and Target (22 percent), according to MonitorTM data. That’s followed by chain stores like JC Penney, Kohl’s and Sears (21 percent), department store like Macy’s and Dillard’s (15 percent) and e-commerce sites (9 percent).

And when asked what type of clothing brands best fit their current lifestyle, the largest percent of shoppers identified “discount brands” such as Walmart, Target, Sears, Kmart and JC Penney (22 percent), according to MonitorTM data. That’s followed by casualwear like Gap, Old Navy and J.Crew (15 percent) and “denim brands” like Levi’s, Wrangler, Lee and Diesel (12 percent).

So after all the holiday gift cards are redeemed and all the returns are exchanged, the apparel industry can once again start the guessing game to see where consumers want to spend their money — and hope a more positive outlook has them itching to spruce up their wardrobe.